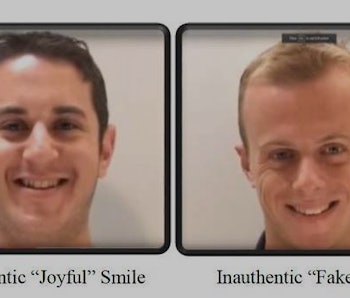 Scientists have long studied collective intelligence in animals, but now San Francisco tech firm Unanimous A.I. is putting collective decision-making technology in the hands of humans. And what’s more, they’re using human swarms to successfully detect deceit. As outlined in a paper presented at the Future Technologies Conference, Unanimous A.I., along with University of Oxford cognition researcher Niccolo Pescetelli, harnessed human swarm technology to detect fake smiles. They found that, working together, humans were wrong about whether a smile was real or fake about half as often as when working alone.

This so-called swarm intelligence is what makes colonies of ants, swarms of bees, and schools of fish capable of performing feats that each individual member can’t even conceive of. These animals are not that intelligent on their own, but by working collectively, groups of ants can build living bridges, while bees can collaborate to pick a new place to live.

Louis Rosenberg, founder and CEO of Unanimous A.I., looked at these emergent properties and decided to apply them to humans. In 2016, the company correctly predicted the top four Kentucky Derby finishers — in the correct order — with its UNU platform. UNU allows humans anywhere in the world to use their computers to weigh in on a question with multiple answers. The company has used this system to correctly predict a number of sporting events and cultural moments, including the Super Bowl, the Oscars, and the World Series.

But what happens when the company pivots? Rosenberg says the results are promising.

The initial results suggest that it does. Unanimous A.I.’s UNU technology allows individual users to weigh in on an electronic interface that looks kind of like a hexagonal air hockey table:

Here’s how it works: The golden magnets are all controlled by individual users, each of whom can see their own magnet and the center puck, but none of the other users’ magnets. Depending on where the users place their magnets, the puck moves. If more users place their magnets in one direction, the puck moves that way. UNU is different from a simple majority poll, though, because users can adjust their answers depending on how they see the puck moving. In this way, it’s a tool for building consensus.

And not only has it been validated scenarios that analyze concrete questions, it shows promise for social scenarios as well, as shown in the latest study.

In this study, users looked at videos of people smiling. The people in the videos were either smiling in response to something — real smiles — funny or simply because they were told to — fake smiles. Then the 168 test subjects were asked to evaluate whether the smiles were real.

When they performed this task on their own, they got it wrong 33 percent of the time.

“It turns out people are not that good at doing it,” says Rosenberg. But when the participants used UNU to build a swarm consensus, they did much better. In fact, the error rate fell by one half.

“It dropped from a third all the way down to about a sixth. People were basically twice as accurate in evaluating if a smile was real or deceitful when working together as a swarm,” says Rosenberg. “For us it was the first research that we’ve ever done that demonstrated that not only does this process of swarming amplify a group’s analytical intelligence, it also amplifies their social intelligence.”

He suggests that human swarms could aid with emotionally driven tasks like jury selection or police work, helping to eliminate bias.

Rosenberg says that swarms, as opposed to polls, can be a less polarizing way for groups of people to reach conclusions. In this way, digital human swarms could be a new, more constructive way for humans to make decisions. They encourage people to find where they agree rather than where they disagree.

“And that’s how bees find the best possible site,” he says. “Often people get stuck on where they disagree.”

More like this
Innovation
8.11.2022 11:00 AM
“Quantum materials” could give the human brain a run for its money, scientists say
By Nathaniel Scharping
Innovation
7.28.2022 11:15 AM
A new robotic twist on the “Turing test” fools human subjects
By Sarah Wells
Innovation
8.5.2022 11:00 AM
Alexa could diagnose Alzheimer’s and other brain conditions — should it?
By Joanna Thompson
Related Tags
Share: