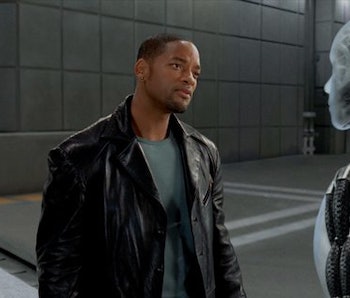 Critics hated it, it made a lot of money, and its futuristic predictions are weirdly spot-on. Yes, we’re talking about Alex Proyas’s 2004 I, Robot, which came out thirteen years ago Sunday.

I, Robot was a firmly mediocre (58 percent on Rotten Tomatoes) movie, even if it did earn $347.2 million at the box office. The neo-noir cop-action story sees Will Smith’s Detective Del Spooner trying to solve a scientist’s murder and eventually staring down a malicious A.I.

Set in 2035 Chicago, I, Robot rips more out of Blade Runner than Isaac Asimov’s collection of short stories of the same name. But what it lacks in plot, it makes up for with a surprisingly prescient world that shows humans interacting with technology in ways that make sense in Proyas’s world and our own. Below are five telling examples.

The roads are all underground

Most of the driving or chase scenes in I, Robot take place on a network of underground freeways. While this may have been a production decision based around the fact that grey tunnels are easier to do in CGI, it’s surprisingly accurate. Elon Musk’s Boring Company already sees tunnels as the future of transportation, getting traffic off of the above-ground streets and into a network of connected tunnels. Likewise, there’s a short skyline shot that appears to show a couple flying cars, but not a sky full of them. It looks more like a system of short hop aircraft like Uber’s VTOL plan, rather than a system where every driver has an aerial vehicle.

The car is less ridiculous than it looks

I, Robot is riddled with product placement, from the “vintage 2004” Converse sneakers Spooner laces up in the opening scene to the Audi RSQ, a concept car designed specifically as a prop that gets significant screentime in the movie. But the RSQ is actually a pretty decent concept — the goofy spherical wheels would be ludicrous if Goodyear weren’t already working on them. It’s also all-electric, an it’s implied that every vehicle in the movie is, except for Spooner’s vintage Ducati (“Please tell me this doesn’t run on gas!” Dr. Calvin exclaims, “Gas explodes, you know!”).

Speaking of the car, the RSQ is also presented as, interestingly, a semi-autonomous vehicle. When Spooner and Dr. Calvin first drive together in the car, Spooner switches over to manual control while on the highway. “What are you doing?” Calvin asks. “Driving,” Spooner replies. “By hand? You can be serious, not at these speeds!” The car is shown going 183 miles per hour. Interestingly, it’s only presented as semi-autonomous — a super-speed version of Tesla’s Autopilot — as Spooner still drives it on secluded roads and when parking. A significant part of Spooner’s plotline also revolves around a truck driver who falls asleep at the wheel, which is interesting because long-haul trucking is probably going to be one of the first transportation industries to automate.

The central antagonist of the movie is an A.I. designed by USR, a massive robotics corporation that’s on the verge of putting a new generation of humanoid robot into every home in America. Apparently, USR has enough control over the market to become pretty much the only supplier of robots to most of the United States, if not the world. In fact, Spooner and the rest of the police department are the only public servants we see in the entire movie — the courier droid is a FedEx bot, not a USPS worker; the garbage bots are from a private company as well. When malicious USR robots overrun the city, Spooner says “I keep expecting to see the National Guard, or Marines or something” and is told that USR has “every contract” with the military (though we do see human soldiers in the end of the film).

Automation has taken nearly all the blue collar work

One of the first outside shots of the movie shows a crew of robotic garbage collectors picking up trash from the street. Scientists, CEOs, and cops, apparently, are still mostly humans, but we see robot deliverymen, robot bartenders and the aforementioned garbage collectors. This is explicitly mentioned later in the film, as well, when the CEO of USR notices Spooner’s distaste for robots and says “Let me guess, your father was one of those people who lost his job to a robot.” There’s also an ingrained classist insult in that sentence — the CEO is also saying that Spooner’s father wasn’t good enough for any job a robot couldn’t do. We’re already seeing these same effects in modern society, as manufacturing and industrial jobs slowly bleed out to the forces of automation. Manual and skilled labor is valuable, and the people that perform it are often just as smart as the CEOs — but loss to automation is inevitable. The hope, however, is that basic income and re-training and education programs can transform blue collar workers into people that have the skills to build, operate, and work with robots, instead of doing jobs a machine can do easier.

More like this
Innovation
8.8.2022 10:00 AM
A wild new plane-train hybrid could whoosh you to your destination — if it can get off the ground
By Molly Glick
Innovation
8.9.2022 11:00 AM
This self-healing material could fix your dinged-up car in 30 minutes
By Molly Glick
Gaming
8.2.2022 1:00 PM
2 years later, Genshin Impact players share their hopes and fears for the game's future
By Jess Reyes
Related Tags
Share: