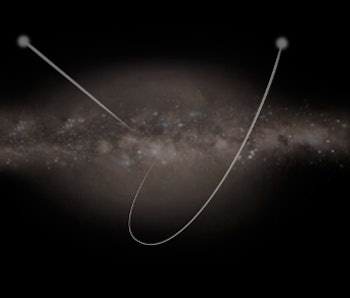 Scientists discovered six stars speeding through the Milky Way at an exceptional pace, with velocities greater than 220 miles per second. One of the stars is barreling through space so rapidly (at 300 miles per second) that researchers think it will shoot right out of the galaxy, like a Babe Ruth-smacked baseball.

Our trusty sun, it should be noted, travels at an impressive 135 miles per second through the Milky Way (as do we), which is well above the galactic average of around 90 miles per second.

The European Space Agency’s Gaia satellite, which is helping scientists unravel our galaxy’s evolution, has gathered the movements of over a billion traveling stars, which is an overwhelming amount of information. To parse through this heap of data, scientists built an artificial brain.

“In the end, we chose to use an artificial neural network, which is software designed to mimic how our brain works,” said Tommaso Marchetti, the lead author of the paper describing the results published in Monthly Notices of the Royal Astronomical Society. “After proper ‘training’, it can learn how to recognise certain objects or patterns in a huge dataset. In our case, we taught it to spot hypervelocity stars in a stellar catalogue like the one compiled with Gaia.”

The past trajectories of the six stars are highlighted in yellow in the video below.

After just an hour, the artificial brain sorted through two million stars and eliminated 99 percent of them, leaving 20,000 potentially high-speeding stars. Scientist refined this to 80 stars and ultimately found that six were traveling at such rare, outlandish speeds.

This brings the known total of hypervelocity stars to 20, and scientists are keen on finding more. These racing balls of gas can reveal how the galaxy evolved, and how different stars got tossed out from the galaxy’s gravitationally powerful core.

“These hypervelocity stars are extremely important to study the overall structure of our Milky Way,” said Elena Maria Rossi from Leiden University in the Netherlands, who presented the six-star discovery at the European Week of Astronomy and Space Science in Prague, Czech Republic. “These are stars that have travelled great distances through the galaxy but can be traced back to its core — an area so dense and obscured by interstellar gas and dust that it is normally very difficult to observe — so they yield crucial information about the gravitational field of the Milky Way from the center to its outskirts.”

Scientists are already developing a more sophisticated artificial brain to find more super-speeding stars. The next brain, which will come alive in 2018, will sort through a billion stars, some of which may have been given such a mighty gravitational kick that they’re already on their way out of the galaxy to become lone blazing orbs, adventuring into the black unknown.