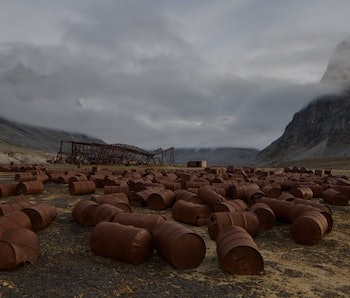 During World War II and the Cold War, the United States built 30 bases in the northern reaches of Greenland to gain advantage over Germans and Soviets. Today, the empty structures lie exposed and rusting on the ice, where they’ve been forgotten by everyone except the Arctic island’s pissed-off inhabitants. The “ghost bases” have been more than just an eyesore — they’re also threatening to leak nuclear waste and human feces into the ocean.

Now, decades later, the trash heap is finally getting cleaned up. But not by the United States.

In mid-June, the Prime Minister of Denmark agreed to pay $4.6 million (about 30 million kroner) per year for at least five years to fund cleanup efforts in Greenland. Denmark got stuck with the bill because it counted Greenland as one of its territories during WWII and was still in control when American military personnel first arrived. Ministers of both nations will meet again in the fall to hammer out the final details of the plan, said Inuuteq Holm Olsen, who represents Greenland in the United States, in an interview with Inverse.

“The cleanup was a bit of a contentious issue for many years, but it hasn’t gone anywhere [until now],” Holm Olsen said. “When it was brought up, Denmark would say, ‘Oh, we’ll look into it.’ They’d write a report and then nothing more would happen.”

America, like Denmark, has avoided taking responsibility for any cleanup efforts, Holm Olsen said, citing an agreement signed with Denmark in the 1940s.

Of the 30 bases that need to be dealt with, Bluie East Two, also known as Ikkatteq base, will be an early target for the cleanup funds. The American photographer Ken Bower traveled there in the summers of 2014 and 2015 to make images of the more than 100,000 old fuel barrels and other equipment just sitting around in the open.

Than 30 military sites abandoned in Greenland not only mar the landscape, said Holm Olsen; they also pose a significant threat to local wildlife, which many citizens of Greenland rely on for hunting.

There may be stranger and darker dangers hiding in Greenland. In 1959, the US Army Corps of Engineers launched Project Iceworm — a plan to load more than 600 ballistic missiles onto train tracks in tunnels under the island’s giant ice sheet for strategic advantage over the USSR. To that end, the Corps built the mostly sub-surface Camp Century, and they powered it with a nuclear reactor.

Iceworm failed, and the Army Corps of Engineers abandoned Camp Century in 1967 with what a 2016 report on the base’s status called “minimal decommissioning.” That means the reactor and a large amount of nuclear waste were left to sit under the ice.

It may be innocuous now, but it won’t be for long, as climate change causes that ice to rapidly melt. Researchers believe there’s a real chance that the buried nuclear material — along with massive containers of human feces and other detritus of a site that once housed 200 soldiers — could slip into the local environment or ocean within 75 years.

Holm Olsen said the $23 million Denmark agreement still might cover the cost of a nuclear cleanup at the remote Camp Century.

“Right now, there’s a scientific expedition out there exploring that site to discover just how imminent the danger is,” he said.

Other bases with less challenging cleanup needs will be dealt with sooner.

More like this
Science
8.3.2022 12:15 PM
Look: 7 Great Salt Lake images reveal how shockingly fast its shrinking
By Jennifer Walter
Science
7.25.2022 7:00 PM
Humans wear cotton every day — now, the plant needs genetics' help to survive
By Serina Taluja and The Conversation
Science
7.24.2022 1:00 AM
Too hot to sleep? Why your nights are only going to get so much worse
By Stephen Burt and The Conversation
Related Tags
Share: