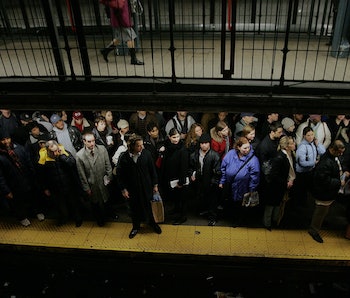 For pretty much everyone with a job on planet Earth, commuting is the most forgettable, maybe worst, worst, worst, worst, part of their day. In New York City, six million people take the subway every day, commuting is more that just a tedious inconvenience — it can be a time-wasting, life-threatening, health-endangering disaster that could leave you trapped in box in a dark tunnel with hundreds of other panicking people.

That’s because the New York subway system, one of the largest in the world, is woefully bad at its job, for some very specific reasons. On Wednesday, the New York Times took a closer look at why, exactly, every subway line in the city has decided to be a piece of crap, and what we can do about it now. One thing’s for sure: it doesn’t look good. Here are five statistics that explain more.

Simply put, there are too many damn people on the trains. The system experiences about 75,000 delays per month, and overcrowding is responsible for approximately one-third of them. There are other reasons, of course but overcrowding is the first and foremost.

And every day, more and more of those people ride the subway. In 1990, four million people rode per day; now, it’s up to six million.

3. The trains themselves are small

Unfortunately, even as more and more people piled on the trains, the subway didn’t get any bigger, adding only 27 new cars in service, from 5,255 to 5,282, and actually reducing the total miles of track.

1. Every stop is supposed to take 30 seconds, but it doesn’t

There are plenty of futuristic innovations that could make the subway better, but the real problem is simple. There aren’t enough trains and train lines to handle all the people in the city.

“The only truly effective way to address crowding on the subway is to run more trains,” John Raskin, the executive director of the Riders Alliance, an advocacy group told the Times. “It’s not a cheap or quick solution.”

More like this
Innovation
8.8.2022 10:00 AM
A wild new plane-train hybrid could whoosh you to your destination — if it can get off the ground
By Molly Glick
Innovation
14 hours ago
Scientists at CERN have discovered too many particles for physics to keep up
By Harry Cliff, Tim Gershon and The Conversation
Innovation
10 hours ago
Mars City: 3 Red Planet resources could forge a critical building material
By CAROLYN COLLINS PETERSEN and Universe Today
Related Tags
Share: