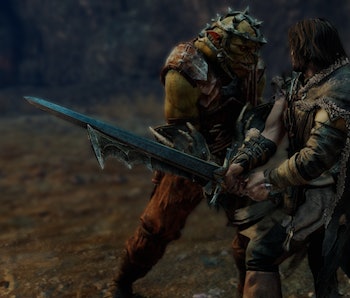 When Middle-earth: Shadow of Mordor came out in September of 2014, Monolith Productions took the video game community by storm by not just creating a rich story which respected J.R.R. Tolkien’s world, but also populating that world with enemies who remembered you — and got stronger as they sought out revenge. As the player destroys and dominates the uruk armies of Sauron, the enemies change and evolve, thanks to the development team’s innovative Nemesis system. But with the game’s sequel, Middle-earth: Shadow of War, Monolith needs to work on creating an army of enemies who evolve around you no matter how often you choose to interact with them.

If you’re not familiar with Shadow of Mordor’s Nemesis system, let’s go over the basics. When Monolith Productions was working on Shadow of Mordor prior to 2014, the development studio knew they wanted to create an army of uruk who would consistently interact with the player character. The idea was to bring procedurally generated enemies to the game’s open world, who would then encounter the player, and evolve based on the reactions the player decided to have with them. Sounds great, right?

In practice, the Nemesis system completely delivered at launch by bringing droves of fantastic captains and warchiefs to the desolate lands of Mordor. Every time you were defeated in battle you’d make a new enemy who would gain in power as he worked through the ranks, and more importantly he would remember who you were next time the two of you engaged in combat on the map. You would create rivals by losing battles against your uruk enemies, and in doing so you’d make the more powerful opponents which were more difficult for you to eliminate or add to your own army later down the road.

The problem with this system, however, was that the further you progressed into the game, the less Shadow of Mordor required you to interact with the uruk leaders scattered about the map. Things simply became a game of eliminating or dominating the main target your mission required, which Talion (the player character) could do in a matter of seconds with overpowered abilities like Storm of Urfael and Shadow Strike.

The result of these quick, basic mission strategies was a Nemesis system which could no longer keep up with the player — namely because the player wasn’t actually interacting with the uruks long enough for them to evolve into more deadly foes. Everything quickly became a cakewalk, and the unique engagements the Nemesis system created fell at the wayside. So, by the time you reached the end of Shadow of Mordor, things became relatively stale unless you purposely restricted yourself to make the gameplay experience a little more challenging.

Over the past few weeks after reading a reddit thread from user FayeGrimm, I’ve been working my way through one of these hardcore mode experiences with Shadow of Mordor. I purposely restricted the abilities I was able to obtain to the first tier, abstained from picking up any attribute upgrades (such as additional health and arrows), and have only dominated captains from the first tier of Sauron’s army which forces me to help them rise through the ranks. Naturally, the game’s more difficult when engaging any sort of enemy force; but more importantly, my alterations have given the Nemesis system room to work.

The experience I’ve had with Shadow of Mordor using these custom rules has allowed me to have numerous encounters with uruk captains which end in my death, which in turn gives them a promotion and unique series of voice lines as we develop a rivalry. Not only did this change make me feel more motivated to kill them the second time around, it also helped develop a sense of strategy that hadn’t previously existed within the game for me.

See, when I found a captain with a set of traits and weapons I was quite fond of, I didn’t just want to kill him and wait for the Nemesis system to generate another enemy. I wanted to see what he was capable of, and if he would serve as a formidable commander in my own army. Suddenly Shadow of Mordor wasn’t a game about killing uruk, it was a game about strategically making my most ruthless enemies better combatants before pulling them into my own army.

Take my pal Norsko the Cook for example, who I met about halfway through my new playthrough of the game. We bumped into each other a handful of times around the map up until the point where he finally got the best of me, delivering on his promise to see my lovely face twist with exquisite pain. This then boosted his power, and since I loved his searing personality, I decided to add him to my ranks. After all, who doesn’t love a uruk who tears through his own kind for stew?

Following his recruitment, I then produced to help him push through the ranks closer to the top of Sauron’s army and the position of warchief — assisting him by eliminating his enemies from the shadows, keeping him safe during feasts for his troops, and dominating more soldiers to join his forces. We had some good times together, up until the moment we attempted to assassinate a captain named Hork who cleaved him down before I could even react.

As you might expect, I was furious seeing one of my most gifted warriors be cut down, and so I proceeded to eliminate Hork myself; resulting in my own death and his rise to becoming a more dangerous enemy for me to tackle. Now, I’m hunting him down, and in doing so hoping to avenge one of my most precious uruk creations of the last few weeks.

What’s wild about this whole narrative is that it wouldn’t have happened had I been using all the tools in Talion’s arsenal, which would have allowed me to cut through dozens of prospective uruk rivals before they even had a chance to grow into formidable warriors of Sauron. Sure, I’d be enjoying the epic wraith powers of Celebrimbor, but at the cost of an engaging gameplay experience that felt like a unique journey amidst the open world games many development studios are releasing these days.

With the Nemesis system making a return in this October’s Middle-earth: Shadow of War, Monolith Productions has already been hard at work improving the personalities, uruk cultures, and combat roles it procedurally generates for the player. There’s a greater emphasis on raising powerful allies to fight by your side, the introduction of wonderfully charismatic personalities, and the legendary siege battles at the heart of the sequel.

The most important aspect of the last few months of Shadow of War’s development however, is to be looking at the dynamic possibilities of the updated Nemesis system and blocking players from completely abusing them with Talion’s epic new abilities. Without an ever-changed battlefield, Shadow of War will fall into the same end game pit as its predecessor, and that’s something I certainly don’t want to see happen based on my recent experiences with Shadow of Mordor using a custom set of restrictions.