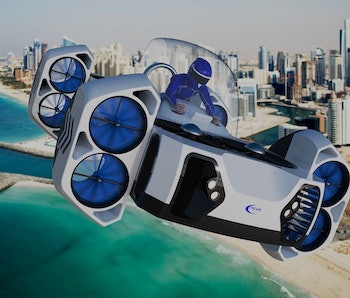 Talk of flying cars is everywhere these days, but real and robust plans have been few and far between. The newest entrant into the emerging field is Neva Aerospace, a collective of five aviation European companies and its AirQuadOne seems — dare we say it — practical.

AirQuadOne’s range it will be about 25 miles, enough to get most people from their house to their workplace, extending the dream to commute by flying car.

It’s powered by a 330-pound battery that can be charged like an electric vehicle. With its four turbofans, Neva is clearly building on the designs of already-operational drones. The fans will allow the ship to take off vertically, sidestepping the need for an airstrip, and propel to heights up to 3,000 feet.

The AirQuadOne feels different from many other “flying car” designs, which are dominated by overly ambitious concepts and expensive models. While Neva’s design doesn’t yet have a price tag, it’s being pitched as sort of the everyman’s flying motorbike, instead of a Lamborghini for the skies. Rather than imagining a wholly new world amenable to flying cars, AirQuadOne seems to capitalize on the best technology already in development, namely Neva’s speciality of high quality drone design and existing electric vehicle charging stations. Plus, the AirQuadOne appears, at least in this early stage, to offer flight alone, instead [trying to be both a car and an aircraft.

That said, here are the big players in the emerging flying car industry:

The emerging flying car industry is only just beginning to grapple with the numerous legal challenges in its future. In the United States, the Federal Aviation Administration would be responsible for approving flying cars and defining appropriate use for the technology. In June 2016, the FAA approved test flights for the Massachusetts-based flying car company Terrafugia. Six months later, it also amended Part 23 of its airworthiness standards, which will go into effect this August and is expected to reduce the cost of certifying aircraft. Both were seen by flying car fans as a signal of the FAA’s willingness to work with them, and Neva says it’s already working on this problem by talking with American and European regulatory agencies about AirQuadOne’s future.

There is a challenge with flying cars in that they’ll be quite noisy, the wind-force generated will be very high. Let’s just say that if something’s flying over your head, if there are a whole bunch of flying cars all over the place, that is not an anxiety-reducing situation. …You don’t think to yourself, ‘Well, I feel better about today.’ … You’re thinking, ‘Did they service their hubcap? Or is it going to come off and guillotine me as they’re flying past?’

Of course, one leading futurist and entrepreneur, Elon Musk, has turned his back on the skies and is currently digging to the center of the Earth… but he still has a point, which is to say that very heavy vehicles flying above our heads and relatively low altitudes are bound to make some people anxious:

To offer a more detailed view of the AirQuadOne, Neva released the following conceptual images:

Neva Aerospace has not released any sort of projected date on when the AirQuadOne might become more than digital sketches.