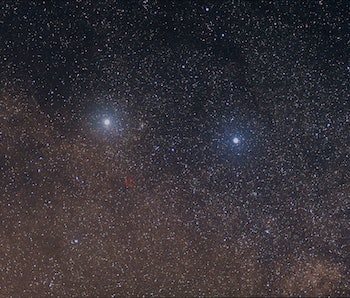 Forget about Mars for a second. If humanity is to ever reach Alpha Centauri — the nearest star system that claims the potentially habitable planet Proxima Centauri b — we’ll likely rely on artificial intelligence-powered spacecraft to put in years and probably decades, of the prep work before we arrive at the destination 4.37 light-years away.

In “Robotic space exploration agents,” a research article published in the Focus section of Science Robotics on Wednesday, a pair of scientists at NASA’s Jet Propulsion Laboratory project that artificial intelligence-driven spacecraft will be hard at work in deep-space, decades before humans arrive. It very well could be A.I. that first interact with extra terrestrials, not us.

But in the near-term, A.I. can be used in research on the surface of Mars.

Authors Steve Chien and Kiri Wagstaff write that one goal of autonomy is “enable robots to detect and respond to unexpected conditions without sitting idle until the next Earth command arrives.

“Remote science operations with Mars rovers are pre-planned and constrained to the local area visible from the previous day’s downlink,” the authors seem to lament.

But there’s good news, they continue: “In an exciting development, many spacecraft have increasing ability to make their own decisions and accelerate scientific discoveries.”

This means that robots with machine learning technology baked in will be able to become more autonomous on the surface of the Red Planet and beyond in the coming years.

“Space exploration is one of those cases where we absolutely need autonomy and AI to achieve the mission objectives,” Kiri Wagstaff tells Inverse. “We can’t be there in person, and we can’t tele-operate across millions of miles of space, so we need to build intelligent, robust systems that can make decisions about where to go and what data to collect even without direct human involvement.”

And in the long-term AI-powered spacecraft will be tasked with searching for aliens, too.

“Future exploration plans place even higher demands on autonomy. Scientists believe that our solar system contains at least eight ocean worlds,” the authors write. “These liquid-bearing worlds may contain hydrothermal vents that could harbor extraterrestrial life, by analogy with extremophiles living near hydrothermal vents in the depths of Earth’s oceans.”

And beyond our solar system, there’s Proxima Centauri. The Breakthrough Starshot project by Russian philanthropist and entrepreneur Yuri Milner, alongside a panel of esteemed theoretical physicists, including Stephen Hawking, announced in in April 2016, their intention to use solar sail technology to send ultra-lightweight robots to the star system. Research spacecraft that would go to make the 60-year journey to the three-star system of Proxima Centauri would need to be able to make its own decisions and conduct research independently of human instruction.

“The goal is for A.I. to be more like a smart assistant… and less like programming assembly code,” writes Chien in a news release published by NASA on Thursday. “It allows scientists to focus on the ‘thinking’ things — analyzing and interpreting data — while robotic explorers search out features of interest.”

“Upon arrival, the spacecraft would need to operate independently for years, even decades, exploring multiple planets in the system,” the authors project about that Alpha Centauri trip.

“We are looking at ways to incorporate this technology for the Europa Clipper mission, which will do several flybys of Europa,” Wagstaff tells Inverse. “We want to detect any plumes and other interesting surface features, like thermal anomalies or interesting deposits of organics. But we also want to be open to finding features we can’t anticipate — anything unusual that doesn’t fit in with its surroundings is valuable.”