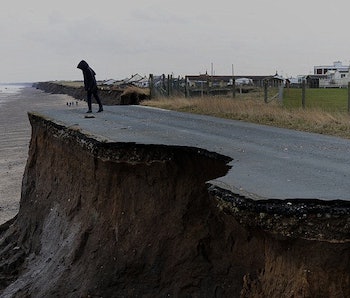 In early June, British rock band Alt-J released Relaxer, an album that is as much about failed relationships as it is about climate change. In the song “3WW,” the first single from the album, guest vocalist Ellie Rowsell from the band Wolf Alice sings: “The road erodes at five feet per year/Along England’s east coastline.” The allusion to erosion is more than just a comparison to a crumbling romance; it’s a reference that, for the Leeds-based band, literally hits close to home.

What she’s describing are the cliff erosions along the Holderness Coast of England. Towns like Hornsea, which is mentioned in the song (“The wayward lad lay claim/To two thirsty girls from Hornsea”), are slowly disappearing. Though these Yorkshire towns began disintegrating into the sea in the years before climate change became the planet’s greatest threat — in 1912, Thomas Sheppard published a book called The Lost Towns of the Yorkshire Coast — scientists now agree that human activity is exacerbating the process.

In 2013, researchers from the UK’s Marine Climate Change Impacts Partnership reported that “it is very likely that currently eroding stretches of coast will experience increased erosion rates due to sea-level rise,” though they noted that the erosion process is not well understood. There’s plenty of evidence for it, however: Land surveys performed by researchers at the University of Hull show that erosions along Holderness Coast can average anywhere from 1 to 10 feet in one year. It’s understood that the soft cliffs aren’t solid rock formations — they’re a composite of clay, silt, sand, gravel, cobbles and boulders deposited by glaciers — and that they slowly erode every time a wave hits. Over time, the base loses its ability to support the top of the cliff, and it falls down in a landslide.

As early as 2008, scientists at the British Geological Survey reported that climate change has made erosion worse for two reasons: Rising sea levels and increased rainfall. “When these two factors are combined it will have the effect of focusing wave energy closer to the shore and cliff faces, leading to increased rates of coastal erosion in areas where cliffs are composed of soft rocks,” they wrote.

For protection, coastal towns have installed sea walls to protect their cliffs, but it’s only a temporary solution. In 2013, The Guardian reported that Yorkshire was disappearing into the North Sea at a faster rate than ever before recorded.

While Alt-J is currently drawing attention to the problems in Hornsea, they might want to give the town of Dunwich a shout-out in their next album. The Suffolk town, also located by the North Sea, looks like the next one that’ll be lost to the waves.