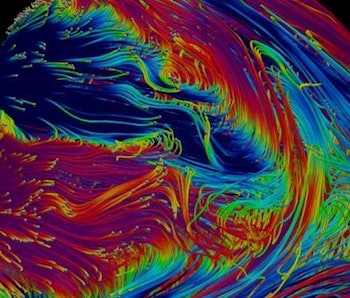 Researchers at Newcastle University have figured out why Jupiter, and other extremely hot exoplanets like it, have such strange and dreamy features.

Jupiter’s iconic swirls of gaseous clouds are pulled by wickedly fast winds moving upwards of 270 miles per hour on a near constant basis. The great red spot—a massive hurricane-like storm that is more than twice the size of Earth — is a product of those winds. The planet also rotates 28 times faster than Earth, despite it’s surface area being 121 times larger.

The reason for this planet’s constant pressure and speed is hidden in an invisible and intense magnetosphere that causes winds to shift in multiple directions. Tamara Rogers, an astrophysicist at Newcastle, discovered this strange effect not in Jupiter, but in an exoplanet very similar, known as HAT-P-7b, which is about 1,040 light-years away from Earth and 40 percent larger than Jupiter.

Earth also has a magnetic field surrounding it, but the high mineral content in the atmospheres of Jupiter-like planets causes a much stronger affect.

“The extreme temperature of these unusual planets causes metals such as lithium, sodium and potassium to become ionized and this allows the magnetic field to be coupled to the atmospheric winds,” Rogers said in a release.

This new method can be used to measure the dimensions and strength of gas giants across the universe, helping astronomers understand how they evolved and ultimately how they influence solar systems like our own.

More like this
Science
8.2.2022 4:45 PM
Perseids, Supermoon, and more: 4 August 2022 sky events you don't want to miss
By Jennifer Walter
Science
8 hours ago
5 years ago, scientists observed a new kind of cosmic explosion
By Allie Hutchison
Science
10 hours ago
The Webb Telescope will use this epic cosmic gadget to reveal hidden wonders
By Doris Elín Urrutia
Related Tags
Share: