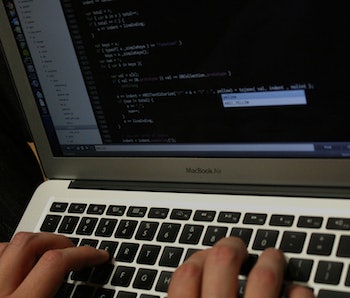 Say goodbye to the days spent pulling out your hair trying to figure out how to get your website to look like it does in your head. A Danish startup just announced that it has developed a neural network that is able to look at a screenshot of a website design and builds the necessary code on its own.

The Copenhagen-based startup, called UIzard is working to decrease the amount of time that is needed to create software. On Tuesday, it demonstrated a neural network called Pix2Code, which turns a single image of the user-facing side of a website into functional code. The neural network gets about 77 percent of the code correct right now, but should become increasingly accurate with more data. Making the user interface parts of a site is one of the most difficult parts to code, so having an A.I. that can do it makes web-design a lot more accessible. It also suggests that software developers are not going to be exempt from automation taking jobs.

“We extrapolate that Deep Learning used in this manner could eventually end the need for manually-programmed [Graphical User Interfaces (GUIs)],” Tony Beltramelli, the developer and founder of UIzard writes in the research paper.

Arguably, as with a lot of software substitution, this innovation could allow at least some humans to work on cooler stuff. In the research paper, Beltramelli suggests it frees up developers to focus on the actual features they’re building, instead of fussing with the user-interface for hours.

The neural net in Pix2Code is a convolutional neural network, a type of network that is able to look at an image at many different scales simultaneously. This allows the network to learn by examining the user interface and underlying code together to see the impact each line of code has on each element of the design. The video showing the AI in action turns a flat screenshot into a page with working buttons in a few minutes.

To foster future research, both the datasets and the code for Pix2Code will be open-source later this year. Beltramelli says the system will steadily get more accurate as it crawls the web to build a database of screenshots and HTML/CSS code. Once that happens, it won’t be long before you can draw your website and let the neural net handle it from there.

More like this
Innovation
7.28.2022 11:15 AM
A new robotic twist on the “Turing test” fools human subjects
By Sarah Wells
Innovation
6 hours ago
This self-healing material could fix your dinged-up car in 30 minutes
By Molly Glick
Innovation
8.5.2022 11:00 AM
Alexa could diagnose Alzheimer’s and other brain conditions — should it?
By Joanna Thompson
Related Tags
Share: