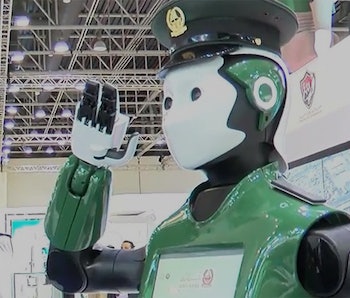 On Sunday, the “smart services” division of the Dubai Police revealed the newest addition to the country’s law enforcement: Robocop. Dubai will be the first city to see the launch of a robotic officer meant to help police deal with the public and even track down criminals, but if the city’s officials have their way it certainly won’t be the only unit for long.

This Robocop greeted attendees of the Gulf Information Security Expo and Conference (GISEC) this weekend, just the first of a whole fleet planned to take to the streets of Dubai. The capital city of the United Arab Emirates hopes to replace 25 percent of its police force with automated technology by 2030, becoming one of the world’s five safest cities not by having the most police officers, but the fewest.

At GISEC, the 5’7”, 220-pound Robocop mostly stood still for selfies and answered questions via its chest-embedded touchscreen. When it hits the streets, citizens will be able to approach it to report crimes and resolve minor issues, like traffic tickets. The advanced A.I. powering it can explore unknown indoor environments to map them, and store this map for later navigation by itself or other Robocops.

Most importantly, Robocops will use facial detection and recognition technologies to help find known suspects, and they’ll be able to carry these cameras down alleys into all sorts of places that want for coverage by installed security and surveillance cameras.

These robots can also use facial recognition to detect a person’s emotional state and change their own behavior depending on the user’s perceived mood, a great example of how the engineer personality type is infiltrating more and more of society through tech; soon, one of the world’s most modern cities will deploy police who try to awkwardly sooth a person’s frantic emotional distress after a mugging or an attack by displaying a different-shaped machine mouth.

Robocop might not have the most action-packed of jobs right now, but it could still have a big impact on crime if it can automate enough of the paperwork of policing that human officers are freed up to spend more of their time doing “real” police work on streets.

The United States is also looking at the prospect of automated policing, but it’s less inclined toward physical robots than it is toward pure software solutions. In America, the automation of policing tends to come from either the pure software sifting of existing camera feeds and military-style robots with tracks and bomb-diffusing graspers.

On the other hand, the United Arab Emirates already has a richly deserved reputation for enforcing restrictive laws on tourists regarding things like sex and drinking. With hundreds of ever-watchful Robocops on hand, the success of robot cops could very well be the failure of the country’s enormous tourism market.