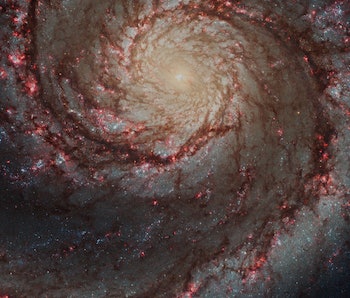 The Milky Way is full of ticking time bombs. When they reach the end of their lives, red giants, a class of massive stars that have almost exhausted the fuel for the nuclear reactions in their cores, balloon up and fart out superheated helium into the outer reaches of space.

Our sun, once it fuses all of the hydrogen in its core into helium, could become a red giant — expanding until it engulfs the Earth. These stars — and their supergiant cousins that eventually detonate into supernovae — are all over the galaxy, and figuring out how far along they are is a slow process.

Well, today a team of scientists from Australia and Denmark trained A.I. to do the work for them. And they found that their deep learning system could predict the ages of red giants with 99% accuracy. So far, the A.I. has classified 7,600 and change red stars, about 5,400 of which had never been analyzed in the past.

By relying on the propensity of deep learning systems for image recognition tasks, the researchers found a way to convert the spectrum data required to calculate a star’s age into an image-like representation that the computer could recognize. Now they can rapidly determine how much helium is left in a red giant’s core, which can give them a better idea of when the star might fizzle out.

While this was a test run for the A.I., the fact that it agreed with 99 percent of existing examinations gave the scientists hope that as they locate more red giants throughout the galaxy, their deep learning algorithm will allow them to accurately date them much more rapidly than the time-consuming standard practices for their field. And as that data set grows, they imply that their A.I. will only become more precise as it learns from our ever-increasing body of knowledge. So far, it’s already corrected 500 star classifications that other researchers had gotten wrong.

In the power spectra of oscillating red giants, there are visually distinct features defining stars ascending the red giant branch from those that have commenced helium core burning. We train a one-dimensional convolutional neural network by supervised learning to automatically learn these visual features from images of folded oscillation spectra. By training and testing on Kepler red giants, we achieve an accuracy of up to 99% in separating helium-burning red giants from those ascending the red giant branch. The convolutional neural network additionally shows capability in accurately predicting the evolutionary states of 5379 previously unclassified Kepler red giants, by which we now have greatly increased the number of classified stars