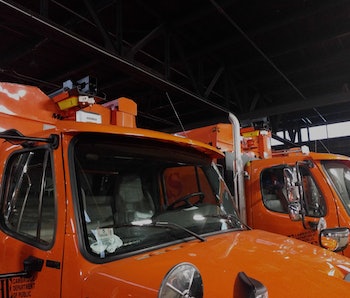 The Internet of Things is expanding every day and researchers at the MIT SENSEable City Lab have developed technology to wire garbage trucks to the internet. Well, at least five of them have been.

Cities are constantly collecting data, from traffic stats and the location of potholes, to air quality measures and sources of large energy leakages. Most of the information is collected from disparate sensing stations or sporadic 311 calls from residents. But Cambridge, just north of Boston and home to the little-known universities MIT and Harvard, is taking a radically different approach.

Garbage trucks are the perfect vehicles to collect data

Five of the city’s garbage trucks have been retrofitted by the lab, bringing them online. Scanners on the trucks continuously scrape data throughout the city, all while the sanitation department carries out its standard trash collection duties. Other cities, the MIT researchers hope, will soon follow suit.

The first iteration of the kit costs about $1,000 and comes with its own solar panel to power the tech. It currently includes air quality sensors; infrared cameras, which can, among other things, identify energy leaks; and accelerometers to measure traffic. The data is transmitted to storage centers over wifi, where the city officials can pour over it and even intervene on the streets when necessary.

The system isn’t Michael Bay-level tech yet, but it’s been improving steadily. On the earliest test run, the vibrations of the truck and heat from the exhaust threw some of the data totally off, prompting a few redesigns.

In the future, the researchers hope to add more elements to the kit — expanding the kind of data it can collect — all while minimizing some of the downsides of the cumbersome kit. They imagine their sensing technology could find its way onto a school bus or other vehicles. But whatever way the project expands, it’ll have to stick with vehicles that reliably cover a large part of the city in a day.

“This is a way to optimize existing services and infrastructure,” Carlo Ratti, head of the lab, told Inverse.

Most importantly, however, they hope their methods eventually move beyond the boundary of MIT’s own backyard. If costs are reduced as the project scales up, as Ratti told Inverse he expects they will, and city governments see that the data generated by the sensors is both valuable and accurate, they may have a shot.

More like this
Innovation
8.9.2022 11:00 AM
This self-healing material could fix your dinged-up car in 30 minutes
By Molly Glick
Science
7.30.2022 7:00 PM
The latest deadly threat to polar bears? Your trash
By Thomas Scott Smith and The Conversation
Innovation
17 hours ago
Scientists may have revealed the ancient secret behind China’s Bronze Age
By Sarah Wells
Related Tags
Share: