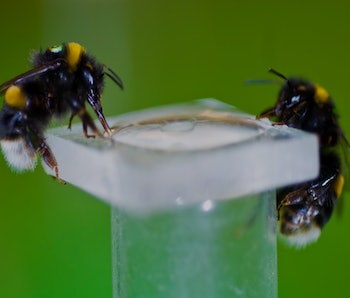 Bees that have been exposed to nicotine make very bad decisions that are not in their own self-interest, according to new research.

A study published Tuesday in Scientific Reports found that bumblebees altered their behavior when exposed to nicotine-laced nectar in a way that is very reminiscent of the drug-seeking behavior of an addict. The article adds weight to evidence that widely used neonicotinoid pesticides disrupt bee foraging and are contributing to the collapse of bee populations around the world.

Nicotine is produced naturally by some plants that use insect pollinators, notably tobacco. These sorts of chemical substances work as a deterrent against getting eaten by herbivores, but at the same time, it attracts bees to its flower so that genetic material may spread.

Tobacco has nicotine in its nectar, though in much lower concentrations than in the body of the plant itself. This new research shows that the drug may actually attract bees, rather than repel them, in the right dose.

Lead author David Baracchi, now with the University of Toulouse, and colleagues at Queen Mary University of London conducted experiments in the lab with real bees and fake flowers to determine how nicotine in nectar changes behavior.

In one experiment, bumblebees were exposed to a field of artificial flowers — basically a piece of plastic preloaded with a sip of nectar — of two colors. One color had straight sugar water, the other had been laced with nicotine. At a low dose of nicotine, bees began to preferentially select the flower color with the drug. At a higher dose, still within the realm of natural occurrence, the bees showed no preference. At the highest dose, many times that which you’d see in nature, the bees avoided the nicotine-laced flowers.

Here’s where things get even more worrying. The bees in the second experiment were quickly run through again, except with the colors reversed. Now, the flowers that used to have nectar had none, and the ones that were just plain water had sugar. None of the flowers in this case were laced with nicotine — the test was only to see how long the bees held onto what they learned in the previous experiment. It turned out that prior nicotine exposure slowed this new learning, making it harder for the bees to switch their preferred flower color. The bees that did worst were those exposed to the very high levels of nicotine.

It goes to show the very powerful psychoactive effect of the drug. Even though bees prefer straight sugar water to sugar water with a very high dose of nicotine, exposure to that high concentration led bees to stick to the flower color that dosed them even when the reward was removed.

“Bees not only remember such flowers better, but even keep coming back for more when these flowers are demonstrably poorer options, as if they were truly hooked on these flowers,” says senior author and biology professor Lars Chittka.

Nicotine is chemically similar to the neonicotinoid chemicals in popular insecticides. Recent research showed that bees preferentially chose nectar laced with these pesticides — even though exposure to the chemicals caused the bees to consume less food overall.

Like with anything, dosage makes the difference between medicine and poison. The nicotine levels in tobacco nectar likely do no harm to bees — otherwise the bees and therefore the plants would suffer. It’s when we start spraying neonicotinoids all over all of the plants that the problems begin.

Many plants defend themselves against herbivores by chemical deterrents in their tissues and the presence of such substances in floral nectar means that pollinators often encounter them when foraging. The effect of such substances on the foraging behaviour of pollinators is poorly understood. Using artificial flowers in tightly-controlled laboratory settings, we examined the effects of the alkaloid nicotine on bumblebee foraging performance. We found that bumblebees confronted simultaneously with two equally rewarded nicotine-containing and nicotine-free flower types are deterred only by unnaturally high nicotine concentrations. This deterrence disappears or even turns into attraction at lower nectar-relevant concentrations. The alkaloid has profound effects on learning in a dose-dependent manner. At a high natural dose, bees learn the colour of a nicotine-containing flower type more swiftly than a flower type with the same caloric value but without nicotine. Furthermore, after experiencing flowers containing nicotine in any tested concentration, increasing numbers of bumblebees stay more faithful to these flowers, even if they become a suboptimal choice in terms of reward. These results demonstrate that alkaloids enhance pollinator flower constancy, opening new perspectives in co-evolutionary process between plants and pollinators.

More like this
Science
7.28.2022 6:00 PM
Meet the tiny critter that pollenates seaweed like a bee
By Jennifer Walter
Science
8.9.2022 10:30 AM
Is my dog depressed or happy? Pet experts explain how you can tell.
By Tara Yarlagadda
Science
7.31.2022 1:00 PM
How do cats co-exist with each other? The answer may lie in their gut
By Tara Yarlagadda
Related Tags
Share: