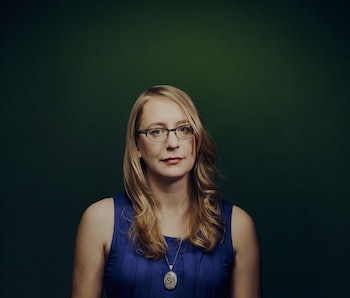 Carrie Nugent has one of the most badass, science-fiction-y jobs a person could have. Nugent, a researcher at Caltech/IPAC, works on the NEOWISE mission, using the Wide-field Infrared Survey Explorer (WISE) to find and catalog near-Earth objects (NEOs). She is, in other words, an asteroid hunter.

Nugent, who’s given TED Talks on her work, recently wrote a book about her exploits and the history of the field, titled Asteroid Hunters. She spoke with Inverse about how we can prevent being killed by flying rocks, how she hopes to work herself out of a job, and how Star Wars got asteroids wrong.

How did you first get interested in studying asteroids?

I’ve always loved astronomy, physics, and geology, so I went to school to study physics, then I went to grad school to study geophysics. The thing that really grabs my attention is that an asteroid impact is the only natural disaster that we have the technology to prevent. That’s really exciting, and I like being involved in the effort to map our cosmic neighborhood.

In your book, you say that science can help us understand and predict the workings of the universe, and that’s part of why you got into physics. How does physics do this better than other scientific disciplines?

The appeal of physics is that it’s immensely simple. Biology is fascinating, but there are a ton of variables, so it’s really interesting to have a set of equations that can capture large-scale processes. There’s also something really fascinating about a science that you can apply to microscopic things and to the entire universe. That’s very lovely. It gives us an understanding of the universe as a whole. It’s a very beautiful topic to study.

How do you hope to change the way people think about asteroids?

Asteroids, to many people, represent this existential threat. They’re metaphors for things we can’t control in the universe. But it turns out that they’re the only natural disaster that we can prevent. This is partly because asteroid paths are incredibly predictable. We can give you a probability that an earthquake might happen in a certain range of time in a certain area, but you can’t predict that an earthquake’s gonna happen on October 2. You might be able to predict a hurricane a couple days in advance, but you can’t predict where a hurricane’s gonna be two months in advance. When it comes to asteroids for which we have a lot of data, scientists can predict where they’re going to be 800 years in the future. I can’t think of anything else we can predict 800 years into the future. But we can predict exactly where these asteroids are going to be. Because of that, we can predict an impact far in advance. That gives us enough time to do something about an impact if we find that one is going to occur.

What could we do if an asteroid was on track to collide with Earth?

I talked to Lindley Johnson for the book’s last chapter. Lindley Johnson has the coolest job title in the world: Planetary Defense Officer. He explains that the scientific community is seriously considering three main strategies. The first one is a gravity tractor: You put a probe in orbit around the asteroid and use that probe to tug it off its course using gravity. That’s a nice method because it’s very controllable. A second seriously considered technique is the kinetic impactor: You take something really heavy, slam it into the asteroid, and shove it off its path. The third one is the one everyone thinks about: nuclear detonation. However, this would not be your Bruce Willis scenario, drilling in and trying to plant the nuke in the surface. You’d want to detonate it slightly off to the side and use the irradiative force to shove the asteroid. And although nukes make for good movies, they aren’t necessarily the best scientific choice because there’s a lot of variables in that scenario. If there’s a scary situation, we want something controllable where we know all the variables and we can very very precisely control what’s going to happen.

When you talk about asteroids colliding with Earth, the term you use in the book is “near-Earth asteroids.” For those who don’t know, what does that mean exactly?

I’ll warn you in advance, it’s going to get a little jargon-y. The little bit of jargon I have to use, because it’s a technical definition, is “astronomical units.” That’s the average distance between the Earth and the sun. So a near-Earth asteroid is defined as any asteroid whose closest approach to the sun is within 1.3 astronomical units. I like to think of them as our neighbors.

So on an absolute scale, they’re not really that near, despite being our neighbors?

Yes, a near-Earth asteroid could never get within many miles of Earth.

How often do asteroids enter Earth’s atmosphere? And when they do, what’s it like?

It depends on the size of the asteroid. There are many more small asteroids than big asteroids out there. One example is the 2013 impact of the Chelyabinsk meteor. That asteroid was initially around 17 to 20 meters across — about as big as a convenience store. Objects of that size hit the Earth every 50 to 100 years or so. I’m giving you a lot of ranges there, but that’s because this is an area of very active study. We’d like to know with more detail how often these impacts happen and whether that rate is changing at all.

So how does one hunt for asteroids?

The devil’s in the details. It’s a very simple process to describe, but once you get to do it on a large scale, it becomes more complicated. Asteroids look just like stars — little points of light in the sky. The only way you can distinguish them from stars is by their movement. You take an image of the sky, and you wait a little bit, then you take another image of the same part of the sky. You compare those two images, and you’ll see that all the stars are in the same place. But there might be something moving in between them. If there’s something moving, and it has an asteroid-like orbit, it’s probably an asteroid.

Asteroids move across the sky in patterns that correspond to the way that they orbit the sun. You can use various software tools to see whether it’s going in an asteroid-like orbit.

Once scientists have identified an asteroid, how do you keep track of it?

An asteroid’s orbit is a unique identifier. Once we have an orbit for an asteroid and we know where it’s going, we can distinguish it from the rest of the asteroids that are out there.

How has technology changed the way we hunt for asteroids?

Technology has been a huge advantage. The first asteroid was discovered by Giuseppe Piazzi. He was trying to make a map of the sky, so he had a very nice telescope for the time — this was 1801. He was drawing maps of the stars by hand, and he happened to draw a star one night. He went to check it again, and he saw the star had moved. He checked it on the third night and saw it had moved again. That’s how the first asteroid was discovered. So we’ve gone from drawing on paper, which is so labor-intensive, to film surveys that used literally photographic film. They’d put it in the telescope, they’d expose it, then they’d develop it that night and compare images. Then there was the development of CCDs. SpaceWatch was the first survey to use CCDs at all. Robert McMillan was nice enough to talk to me for the book, and he said at that time there wasn’t this fancy array you get today that has all the parts and you plug it into a computer. It was just the chip, so you had to build the thing the chips sit on and connect all the wires, and you had to write the software to read the chip, and then you had to cool the chip. They did it with dry ice in spaghetti bowls and coffee cans! It was very challenging work, and they really pioneered this technique for asteroid detection. Of course as time has gone on, now we have bigger CCDs, we have more data, and we can scan bigger swaths of the sky at a time. So asteroid detection has really grown along with technology.

How do you see your job as an asteroid hunter changing in the future?

In a perfect world, I would love to be done with this job in 10 years. We have the capability to find 90 percent of the 140-meters across or bigger asteroids that get close to Earth within that timeframe if we have the resources. Ideally, we would find most of these large objects, we would map them, and we would keep a good eye on them. Then this effort can ramp down a little bit. Whether that will happen remains to be seen. Finding all of these large asteroids that get close to Earth is something we can accomplish in my lifetime, and hopefully well before I die.

So if you do a good job, you’ll work yourself out of a job?

Yeah! And then you can do other interesting things, but it would be really nice to really explore the cosmic neighborhood and perhaps even rule out a collision entirely, for objects of a certain size. That’d be pretty awesome!

To end on a fun note, in your book, you talk about how The Empire Strikes Back got asteroid fields wrong. For anyone who hasn’t read it yet, could you tell us what going into an asteroid field would actually be like?

I can tell you what going into the Main Belt in our solar system is like. I don’t want to rule out an asteroid field somewhere in a galaxy far far away, but if you’re going through the Main Belt of asteroids between Mars and Jupiter in our own solar system, it’s unfortunately not at all like that movie. There’s a lot of asteroids there, but they’re very small and they’re very spread apart. So if you were to stand on any one asteroid, you might see another asteroid in the sky, but it would appear as something very very small. If you were to take all those asteroids and squish them all into a giant ball somehow, the size of that object would be less than our moon. So there’s really not a lot of volume out there. And it should be said that NASA has a perfect track record of navigating the asteroid belt. All these probes have gone through it, and there’s never been a problem. It’s not quite what the movies show. I do love The Empire Strikes Back because in that movie the asteroids are the real heroes. The Millennium Falcon isn’t shooting anyone down. The asteroids are doing the heavy lifting there. They never get any credit for that!