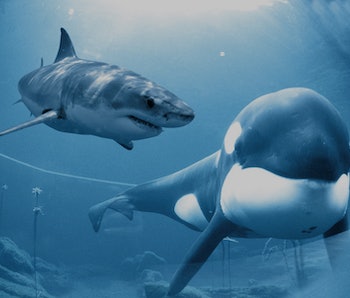 In a completely unprecedented series of events, three great white shark carcasses have washed up on beaches near Cape Town in South Africa over the past week. Each of them has a gaping wound to the belly, the liver removed.

The culprit is almost certainly — and shockingly, to scientists — killer whales.

“We have never seen anything like this,” white shark biologist Alison Towner at the Dyer Island Conservation Trust says, according to a blog post by Sharkwatch SA. “Obviously this is a very sad time for us all. Nature can be so cruel and the dexterity these enormous animals are capable of is mind blowing — almost surgical precision as they remove the squalene-rich liver of the white sharks and dump their carcass.”

Killer whale attacks on great white sharks are rare, and have never been documented before in South Africa. To find three sharks dead in a week with matching wounds is astounding. The first, a female, measured 16 feet long and weighed 2,500 pounds. Two males, measured 11 and 14 feet, followed in the days after. Autopsies of each confirmed that the entire liver, and in some cases heart, had been removed.

Why exactly local orcas have a sudden taste for shark organ meat is unclear, although as Towner notes, they are a rich source of squalene. Squalene is a type of fat produced by all plants and animals that is vital to the synthesis of certain chemicals within the body, including cholesterol, Vitamin D, and some hormones. It is used in cosmetics and also sold as a health supplement, purported to have anti-cancer properties and to protect against heart disease.

Whatever the reason, it’s a scary time to be a shark Cape Town, and any survivors appear to have cleared the waters. Cage diving shark tours have failed to make sightings in recent days. If there was ever any ambiguity as to who is the top predator in these parts, there certainly isn’t any now.