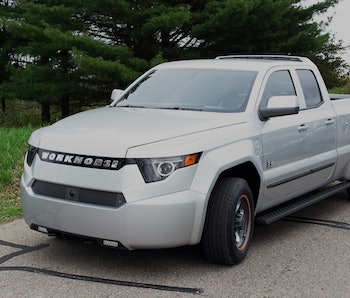 On the heels of Elon Musk’s recent announcement that a Tesla electric pickup truck will be unveiled in 18-24 months comes an even bigger reveal from Indiana competitor Workhorse Group Incorporated: The company has unveiled finished prototypes of an electric pickup that will be available for fleet operators next year. Sleek and speedy, the W-15 Electric Pickup Truck may become the first pickup in the electric vehicle market.

The W-15 will cost $52,500 before incentives or tax credits. That definitely isn’t cheap, but as Workhorse CEO Steve Burns told Wired, the investment pays off: “For the first time in 108 years, someone has invented a truck that’s cheaper than a gasoline truck over its life.”

The truck is powered by a 60-kilowatt battery that lasts around 80 miles, after which an electric generator takes over until you recharge it. The battery is also able to power work lights and tools. The vehicle can move from 0 to 60 mph in only 5.5 seconds and is very quiet.

Workhorse revealed the truck on Wednesday, along with a series of photos and a video of the W-15 taking a test drive.

It certainly seems like Workhorse will beat Tesla in the race to release the first electric pickup. Trucks are a staple on American roads, and electric cars will dominate the automobile future, so this is a huge market to initially monopolize (although Tesla and Workhouse will target slightly different consumer bases, since Workhouse is originally selling only to fleet operators). May the best company win.