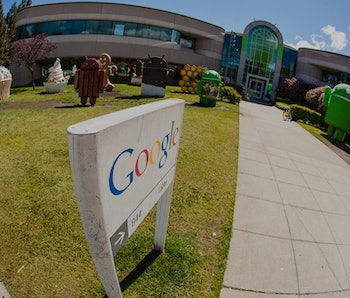 Google has been leading the rainbow path to knowledge since it first went online to the public in 1998. Now, the company has set a standard, cultivating what we now know as Silicon Valley, and spearheading the latest innovation in technology from self-driving cars to artificial intelligence. As of December 2015, the company had more than 61,000 employees and it’s still growing.

If you’ve ever wondered what jobs will look like in 20 years, or even five, Google is probably a safe bet in the right direction. We’ve created a list of the most interesting and unique positions that the company is hiring for right this minute so you can get a taste of the future:

Be on the virtual reality team with this high-tech gig, designing a comfortable and innovative user experience and putting bulky, heavy headsets where they belong: the past.

As artificial intelligence becomes ever more immersed in our daily life, Google Brain will help doctors detect diseases and advance medical science faster than ever before. In this role, you’ll be working with industry leaders to help them assess what kind of tech they need to adapt to the future of medicine.

In this position, you’ll be responsible for the entire look, feel, and user experience of Waymo technology, integrating it into the design of the self-driving cars of the future.

Work in the clouds … the Google Cloud that is. You’ll be designing and implementing machine learning into all kinds of business models and helping companies work on their own intelligent platforms.

Google is known for its easy-to-use and seamless interface. Someone who has never used the internet could learn how to use the search engine in minutes. This is because of the network engineers who are working behind-the-scenes to tweak and maintain the evolving platform 24/7.

Google wants to transform Waze into the carpooling platform of the future, starting in L.A. You’ll have to know all the “quirks and intricacies” of the industry for this role, designing every detail of the user experience and building the carpooling community.

You’ll have to go down under for this position in Sydney, Australia, but you’ll play a hand in the ongoing success of Google Maps. The plan is to take the app from a “static experience to a real-time two-way conversation that reflects the real world.” Imagine that.

You’re the Google chameleon with this role. You’ll have to work across a range of disciplines to improve Android’s camera platform. This requires a lot of skills you don’t learn in school and you’ll likely be changing your job title and team every few months, according to the description.

In this role, you’ll be the magician making Google the beautiful thing that it is. The description says you’ll be helping the billions of people who use Google, use it better by creating an “inspired, refined and even magical” user experience.

More like this
Innovation
8.1.2022 9:00 PM
This mind-bending material could turn us into chameleons
By Molly Glick
Entertainment
15 hours ago
Rings of Power clip sets up an epic Sauron moment Tolkien fans will love
By Alex Welch
Mind and Body
16 hours ago
Nordic Diet vs. Mediterranean Diet: The health benefits of eating like a Viking, explained
By Duane Mellor, Ekavi Georgousopoulou and The Conversation
Related Tags
Share: