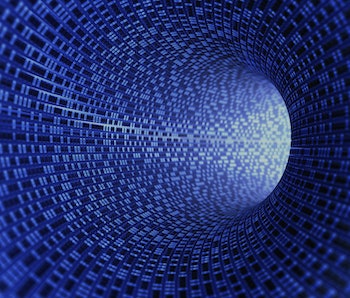 Researchers have discovered an entirely new way of generating “indistinguishable photons,” the hard-to-create sources of energy we need to power quantum computers. It’s a crucial step in our development of quantum technology, and naturally, ties back to artificial intelligence. The research was published Tuesday in the journal Applied Physics Letters.

The phrase “indistinguishable photons” refers to them being indistinguishable from each other, and they’re a vital source of energy for quantum computers. A regular computer processes and stores information in binary, meaning the bits are always either 0 or 1. A quantum computer, though, harnesses principles of quantum mechanics so that the bits (cutely named “qubits”) can also be 0 and 1 simultaneously.

Scientists at the University of Tsukuba and Japan’s National Institute for Materials Science forged a new path for creating indistinguishable photons by testing the nitrogen impurity centers within III-V compound semiconductors. The elements within those centers facilitate a state of energy called an “isoelectronic trap,” which generates photons that contain the same energy — and are therefore indistinguishable.

This research marks the first time anyone’s used the nitrogen luminescence centers found within certain semiconductors to create the phenomenon. There are already a few established sources for generating identical photons, namely semiconductor quantum dots (an entirely separate rabbit hole you may fall down here if you are so inclined). But this new method is potentially faster and more conducive to the photons’ homogeneity, which isn’t always precise enough when created through the requisite huge numbers of quantum dots (more dots = more variability in charge).

“[I]ndistinguishable photons are very important for quantum information technology such as quantum teleportation and linear optical quantum computation,” says first author Michio Ikezawa. “Our goal is to be able to provide many photon sources that generate indistinguishable photons in an integrated form in a semiconductor chip.”

Why Quantum Comping Is So Important

Even someone like Nielson, who has worked in quantum computing for more than a decade, struggles to produce an adequate explanation of how quantum computers actually work — which is, really, the whole point. If they functioned in a way that our brains could recognize and interpret, they would just be advanced versions of binary computers, rather than something in a class of their own.

Quantum processing drives the deep learning of A.I., and the more smoothly we can facilitate the creation of indistinguishable photons, the better-functioning and more advanced our A.I. can become. Since that processing occurs at the single-particle level, it requires photons that are essentially all the same.

How It Could Affect A.I.

It’s too early to say for sure what tangible impacts this will ultimately have on A.I., because the method itself still needs to be refined. The researchers observed that while the degree of indistinguishability they obtained was high, it wasn’t as high as it could be. One of the next steps will be to get a more comprehensive look at the mechanisms that are likely to account for the interference and develop a way to compensate for them. But if and when that research is successful, we could potentially be looking at the new standard for creating identical photons, one which overtakes and improves upon the use of quantum dots to power our next developments in A.I.

“While atoms have long been the gold standard for emitting such indistinguishable photons because of their high stability, there is a race among solid-state emitters such as quantum dots, nitrogen-vacancy centers in diamond, and other color centers to determine the leading candidate for integration with future quantum computers and quantum networks,” Gurudev Dutt, a quantum physicist at the University of Pittsburgh who was not involved in the research, tells Inverse. “This work demonstrates that the [nitrogen centers in semiconductors are] starting to emerge as an important competitor in this arena.”

More like this
Innovation
8.13.2022 11:00 AM
Scientists at CERN have discovered too many particles for physics to keep up
By Harry Cliff, Tim Gershon and The Conversation
Innovation
8.12.2022 9:30 AM
Indoor lights make us sick — this technology could fix that
By Miriam Fauzia
Innovation
8.11.2022 11:00 AM
“Quantum materials” could give the human brain a run for its money, scientists say
By Nathaniel Scharping
Related Tags
Share: