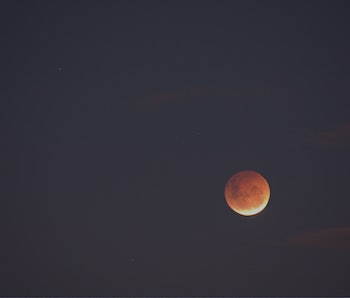 The full moon tonight will reach its peak at 2:08 a.m. Eastern time, early Wednesday morning on the East Coast. But why is it called the “Pink Moon”? There’s a reason behind the lovely name.

On this night, the moon will be on the opposite side of the Earth and the sun will be illuminating it, giving those in the Northern Hemisphere a view of an extra-bright moon.

The moon revolves around Earth every 29.5 days, and depending on its position between the sun and the planet, it can look like a tiny sliver or as if it is cut in half. But, there is only one Pink Moon a year and during this phase, which will persist until Wednesday, the sun and moon will rise and set almost simultaneously in the mornings and evenings, so the sky will never be without a celestial reminder of how small we are in the vast universe.

Why It’s Called the “Pink Moon”

This time of year, the wild ground phlox flower (pictured below) blooms across the United States and Canada.

It’s not officially a reference to the folk album Pink Moon, by Nick Drake, released back in 1972 — but no one will stop you if you’re looking for music while you stare up at the moon.

The April moon marks several religious ceremonies such as the Jewish holiday known as Passover, which celebrates the liberation of the Israeli people from Egyptian slavery. It also marks the Hanuman Jayanti, which commemorates the birth of the Hindu lord Hanuman. And the Christian holiday of Easter, which celebrates the resurrection of Jesus Christ.

It’s a holy time of year for humanity, but the Pink Moon, unfortunately, is not actually pink. It got its name from Native Americans who named the moon after an outrageously pink wildflower known as phlox, which blooms in early spring around the same time as the moon phase.

The moon will rise at 8:01 p.m. Eastern on Tuesday. But, it won’t reach its peak brightness for a few more hours. Even city dwellers should be able to spot it in the night sky.