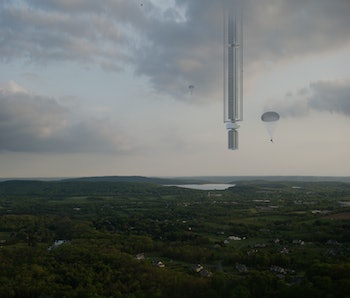 Buildings of the future will stretch high into the sky in our cities of the future, but they may not even be attached to the ground. At least, not if architecture firm Clouds Architecture Office has anything to say about it. The firm just made public a conceptual design for a 20-mile skyscraper that would hang suspended from an asteroid in orbit around the Earth. It’s called Analemma Tower and — considering that no current building in the world comes close to even approaching one mile in height — the new tower would be the tallest building in the world, by far.

If it ever gets built, that is.

The proposal for Analemma Tower would have the building run on solar energy, use recycled water, and contain both business and residential spaces. Those on the upper floors would be living more than twice as high as most commercial flights are designed to fly. Sure, those residents wouldn’t be able to go outside because of the certainty of death in the sub-freezing temperatures and near-vacuum — but think of the view!

Is such a construction project even possible with current — or even near-future — technology? Or does Analemma currently amount to little more than a stratospheric pipe dream?

The answer, unfortunately for big architecture dreamers, appears to be the latter. There are several aspects of the Analemma project that are either logistically or technologically infeasible at this time. The main one is the crux of the whole idea: suspension from an asteroid in orbit some 30,000 miles in the sky, from which the Analemma would be tugged in a figure 8-style routine around the world every 24 hours, settling at regular intervals over hubs like New York City. It just can’t work right now.

But the reason for that is probably not what most people would point to. Physically relocating an asteroid into Earth’s gravity is perhaps the most realistic part of the plan. Although it is set to be scrapped in the new federal budget, NASA’s Asteroid Redirect Mission was an endeavor which would basically move a large boulder from a near-Earth asteroid into lunar orbit. That plan would be a dramatically useful way to test out technologies relevant to hauling large space objects from far away and dropping them into regions that were more suitable for practical applications.

The real problem to Analemma is the necessity of cables to attach the building to the asteroid, a shortcoming of which Clouds AO is well aware. “In addition to the atmospheric drag and conflicts with air travel and existing satellites, there are still no materials existing to make a cable strong enough to support the tower,” a spokesperson for the firm tells Inverse in an email. To put it in perspective, the best cables currently imaginable could only bear about two-thirds of the load. And it goes without saying that, if those cables fail and Analemma Tower were to fall, the effects would be devastating, especially if it occurred over a place like New York City.

Jonathan McDowell, astrophysicist at the Harvard-Smithsonian Center for Astrophysics, has also pointed out another reason why the cables likely won’t pass muster. “The fact that space tethers are often cut in two by a space debris hit is the reason they haven’t seen extensive use since the 1990s,” McDowell told the Christian Science Monitor. There’s simply no way to ensure the cables won’t fail.

The varied atmospheric conditions all along the height (or length?) of the tower also present a substantial problem. Here again, McDowell identified clear issues: “you have the interaction of the tether with the atmosphere, winds, etc,” he said. Not to mention the logistical nightmare of guiding airplanes in routes that take them far around a tower which itself is also moving.

A host of other issues also exist — making large windows strong enough to withstand the pressure differential on the upper floors, transporting and launching the tower, and actually compiling the space materials to construct the thing — but they all seem surmountable next to the bigger challenges. Even so, “I would bet against it for at least the next 200 years,” said McDowell.

But that doesn’t mean there isn’t value in this kind of wishful thinking. Clouds AO tells Inverse, “We believe that some day buildings will break free from earth’s surface, releasing us from harmful floods, earthquakes, and tsunamis. Analemma Tower is a speculative idea for how this might be achieved sometime in the future.” It’s a commendable idea, and a future free from terrestrial disasters sure does sound like a good one. Only, for now, it’s going to have to remain just that: an idea.