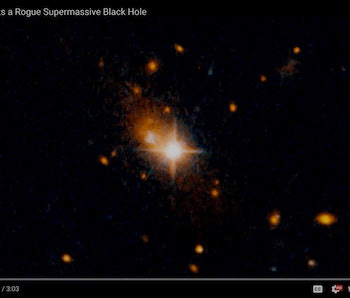 Astronomers have occasionally spotted black holes that seemed to be outside of their galaxy’s centers, but they’ve never been able to confirm that phenomenon — until now. A team of scientists just discovered a supermassive black hole 8 billion light-years away that is definitely traveling away from the center of galaxy 3C186.

Any black hole is terrifying. But imagine this one, which has a mass one million times bigger than our sun and is zipping through space at a speed of 4.7 million miles per hour.

This supermassive black hole is currently about 35,000 light-years away from its galaxy’s center. Astronomers are speculating about the kind of powerful force that could’ve knocked it out of place, and have decided that it was likely triggered by the merging of two smaller black holes.

Astronomers have long suspected that black holes could combine, and this provides further evidence of their theory.

The merging event probably happened around one or two billion years ago.

Astronomers have also noticed arc-shaped tidal tails, or long trails of stars and interstellar gas, near the black hole. Those indicate that the event was more than just a collision of black holes, but also a collision of galaxies.

There’s still a lot we don’t know about this rare occurrence, but the researchers are trying to secure some more time with good ol’ Hubble to further inspect the phenomenon.