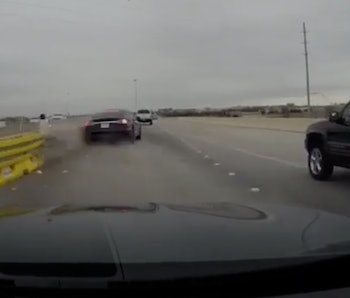 Tesla’s Autopilot is very good at what it does. But for now, at least, the person behind the wheel of one of Elon Musk’s self-driving cars has to be paying attention and ready to intervene at a moment’s notice. Otherwise, there’s a chance the Tesla will crash in a way that could’ve easily been prevented, as seen in dramatic new dashcam footage.

The footage, which surfaced on Reddit after the driver of the crashed Tesla posted about the experience from his perspective, shows a Model S cruising down a highway near Dallas when it whams into a barrier, grinding to a smokey halt.

“I was driving in the left lane of a two-lane highway,” the driver, Redditor u_- wrote. “Autopilot was on didn’t give me a warning. It misread the road and hit the barrier. After the airbags deployed there was a bunch of smoke and my car rolled to a grinding stop. Thankfully no one was hurt and I walked away with only bruises.”

Pretty much everyone can agree that the construction barriers on the highway were atrociously designed. Without any cones or other warnings ahead of time, the barrier really does seem to come up out of nowhere. Even the human driver in the car with the dashcam comes a little too close to it for comfort. It’s not a scenario that Autopilot is really equipped to deal with in its current form.

Electrek notes that it’s possible that the Forward Collision Warning system might’ve failed to alert the driver, but there’s no way that the Tesla should’ve been expected to engage Automatic Emergency Braking. That’s a last-resort feature, and in this instance, the first resort should’ve been the human at the wheel taking action.

The driver involved in the crash (although given how things went down, it might not be fair to call them a “driver”), shared some pictures of his damaged Tesla.

It really could have been much worse. Plus, it’s worth keeping in mind that, when used correctly, Autopilot can (and has) prevented crashes. The NHTSA says Autopilot dropped Tesla’s crash rate by 40 percent.

A representative from Tesla told Inverse that the company does not comment on individual crashes, but reaffirmed that Autopilot is supposed to work in conjunction with an alert human driver.

“Tesla Autopilot always requires that the driver remain engaged and ready to take over at any time,” the company said in a past statement.

More like this
Innovation
19 hours ago
Prolific Tesla beta-tester reveals what Full Self-Driving 10.13 needs to fix
By Andrew Moseman
Innovation
8.15.2022 2:00 PM
Tesla software updates reveal a potential roadblock to electric vehicles’ expansion
By Vivek Astvansh and The Conversation
Innovation
8.13.2022 9:00 PM
Want to buy an EV? Here’s what you need to know about the Inflation Reduction Act
By James Morton Turner and The Conversation
Related Tags
Share: