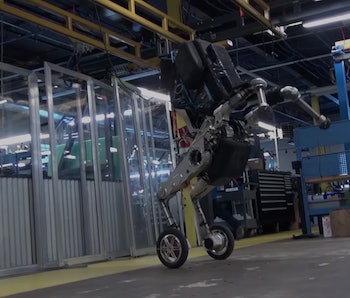 Standing on two wheels, Handle moves around like a talented waiter at a roller skating burger joint — albeit one who can successfully jump down stairs, navigate a snowy hillside, and carry 100 pounds.

Handle stands about six and a half feet tall and can zip around at about nine miles an hour with highly acrobatic moves. It can travel about 15 miles on a single charge of its electric battery and can jump four feet up into the air. In the video Handle’s leap over a barrier gives the impression that the robot is a skater punk. The rolling robot uses “many of the same dynamics, balance and mobile manipulation principles “ as Boston Dynamics uses in the humanoid Atlas and dog-inspired Spot robots.

Footage of Handle first surfaced four weeks ago via a leaked video posted to YouTube where Boston Dynamics founder Mark Raibert debuted Handle. It was during the Abundance360 conference in Los Angeles on January 31. Here’s Raibert’s description of Handle then:

“Now everybody thinks we only do legged robots, so no one has seen this. You guys are the first. This is the debut presentation of what I think will be a nightmare-inducing robot if you’re anything like me, but this is an experiment in combining wheels with legs with a very dynamic system that is balancing inside itself all the time and has a lot of knowledge of how to throw its weight around, which it uses to help stabilize itself.”

“This is much more efficient than a legged robot; it can carry a heavy load on a small footprint and it’s basically an exercise in seeing if we can do something like the humanoid that has less degrees of freedom but eventually could be less expensive and still have significant capability. We call this Handle, because it’s supposed to handle objects eventually.”

Don’t be surprised if Handle bots are zipping around warehouses in the near future. Boston Dynamics has been under pressure to create technology that could turn a profit and it’s hard to see how these robots wouldn’t be attractive to business owners eyeing the bottom line.

More like this
Innovation
8.1.2022 9:00 PM
This mind-bending material could turn us into chameleons
By Molly Glick
Innovation
8.9.2022 2:00 PM
A small robot on the ISS will practice performing surgery in space
By Doris Elín Urrutia
Innovation
7.29.2022 2:00 PM
Amazon's new invention could let you “speak” to the dead — but should it?
By Sofia Quaglia
Related Tags
Share: