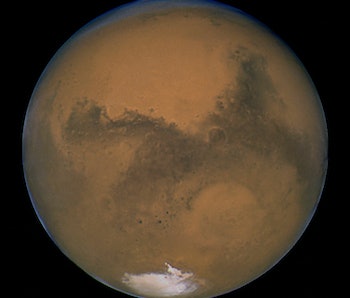 Bad news, Mars heads. The red planet’s signature orange glow won’t be in the night sky for most of 2017, but if you’re trying answer the age-old question — “Where is Mars tonight?” — there are a few key dates on the calendar.

You may be wondering why 2017 is such a bad year for Mars viewings. The answer lies in the planet’s orbit. Mars orbits the sun in almost twice the time Earth does — 687 days to Earth’s 365 — so there are times when the planets pass relatively close to one another (about 35 million miles away) and times when they are 249 million miles apart — more than twice the distance from Earth to the sun. Because of the two planets’ variable distances, Mars’s visibility from Earth varies a lot from year to year. This changing nature makes the planet fun to observe, but it can also be frustrating in off years like this one.

How to See Mars in the Night Sky

Mars, like the other planets in our solar system, is visible without any special equipment when it appears in the hours between sunset and sunrise. It looks like a star, but instead of twinkling blue or white like a star, it glows reddish-orange. Depending on where Mars sits in relation to Earth, viewers can also distinguish the red planet from the surrounding stars by its size. At its farthest away, like this year, the planet occupies about 3.5 arcseconds of the night sky, hundreds of times larger than most stars. But at its closest, as it will be on July 28, 2018, Mars will occupy 24.2 arcseconds, making its size as noticeable as its hue.

Mars approaches Earth closely every 26 months, and the last time this happened was May 30, 2016. In mid-July, 2018, Earth will pass close to Mars again, giving observers the brightest view of the planet in years (and providing SpaceX a great opportunity to send its Red Dragon to Mars). That being said, 2017 will not be the best year for viewing Mars from our planet since it’s an in-between year when Mars is moving farther away from us. On January 1, 2017, Mars was 1.64 astronomical units away from Earth — about 153 million miles — and it will continue to get farther away, reaching 1.964 astronomical units away — about 183 million miles — on December 31. But fear not: There will be a number of nights on which you can still see it clearly, either with the naked eye or with minor magnification.

Here are the best nights to see Mars, either by itself or with other planets nearby:

Just after sunset on February 27, viewers in the Northern Hemisphere can see Mars near Venus in the southwest sky. As an added bonus, Uranus will pass less than one degree away from Mars, and can be seen with binoculars. Since Uranus is much farther away from Earth, it will appear as a dot just a fraction as bright as Mars, but it will be visible nonetheless. Look just a tiny bit left of Mars to see Uranus. This will be the last time in 2017 that Mars appears to pass near another planet in our night sky.

After this point, Mars will become progressively harder to see. It will appear lower in the sky and set earlier in the evening, until July 27 when it passes behind the Sun in relation to Earth, and can no longer be viewed. This marks the end of Mars’s 2015-2017 apparition, the period during which it is visible from Earth.

On this night, Mars will pass near Earth’s moon in the night sky. Though the moon is bright, Mars will still be bright enough to see with the naked eye or with binoculars in the late evening and early nighttime.

Since March 1-2, the last time Mars appeared near the moon, it will have done so a few more times, but during the daytime when it’s not visible to casual observers. This night marks the last time in 2017 that Mars will appear near the moon at night, once again in the early hours of darkness.

Starting in late August, Mars will pass from behind the sun and once again become visible in the eastern sky at dawn in northern tropical latitudes. This begins the 2017-2019 apparition, which will culminate in July 2018 with the planet passing closer to Earth than it has since 2003. The farther north you live, the longer you’ll have to wait to see Mars again. At this point, Mars will be visible in the early hours of the morning, but will be too close to the sun to safely view with the naked eye.

At this point, Mars will have started its 2017-2019 apparition and moved far away from the sun that it’s safe to view the planet in the sky. Viewers will be able to observe its conjunction with Venus, when the two planets will line up in the morning sky.

Check back to this guide for the best days to view Mars in 2017.