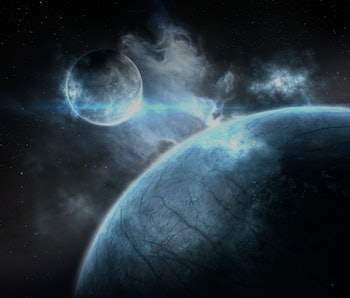 If the discovery of a star system with seven potentially habitable planets 40 light-years away has you feeling anxious to get in on the action, you might be in luck — especially if you’re a gamer. With the EVE Online multiplayer game, you can look for new exoplanets from your computer.

The game’s developer, CCP Games, will work with citizen science platform Massively Multiplayer Online Science (MMOS), Reykjavík University, and the University of Geneva to crowdsource space exploration in EVE’s virtual universe and help scientists look for other planets outside the solar system.

“In searching for the next dataset for our massive player community to tackle, the stars aligned for players to have the opportunity to directly contribute to the search for new planets with a world-renowned scientific team,” Andie Nordgren, EVE’s Executive Producer, said in a statement Wednesday.

This isn’t the first citizen scientist game from CCP Games. Last year, players used Project Discovery to contribute to the Human Protein Atlas, a database of high-res images of proteins to help scientists study the role of proteins in the human body. Project Discovery sent over 25 million human cell classifications to the database.

The exoplanet search on the game will come out later this year. Michel Mayor, astrophysicist at the University of Geneva, will do a presentation about this at EVE Fanfest 2017, which takes place April 6 to 8 in Reykjavík, Iceland.

“Real people around the world collaborating in a virtual universe to explore the real universe is the stuff science fiction, and soon science fact, is made of,” Nordgren said.