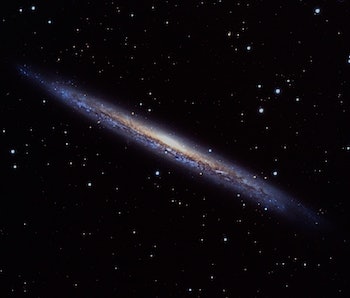 NGC 5907 is a forgotten, boring galaxy. With very few bright giant stars, astronomers thought it mostly consisted of dim dwarf stars. But, something suddenly twinkled in the galaxy nearly 50 million light-years away.

The twinkle, detected by the European Space Agency’s XMM-Newton, is a spinning pulsar, named X-1, that measures a thousand times brighter than astronomers previously thought pulsars could be — making it the brightest, farthest pulsar ever found in the universe.

“The discovery of this very unusual object, by far the most extreme ever discovered in terms of distance, luminosity and rate of increase of its rotation frequency, sets a new record for XMM-Newton, and is changing our ideas of how such objects really ‘work’,” says Norbert Schartel, ESA’s XMM-Newton project scientist.

A pulsar is a rapidly moving neutron star — the remains of an exploded supernova). It has a powerful rotation that drives two electrical fields that each give off a beam of electromagnetic radiation. As the pulsar spins, the beams may move in and out of visibility from Earth, making it look as though it is flickering or pulsing — hence its namesake.

But X-1 is so bright that scientists are recalculating their old measurements for these dense stellar corpses. According to ESA, in one second, X-1 emits the same amount of energy the sun releases in 3.5 years. XMM-Newton has been monitoring X-1 since 2003, but scientists thought it was a black hole.

“Before, it was believed that only black holes at least 10 times more massive than our sun feeding off their stellar companions could achieve such extraordinary luminosities, but the rapid and regular pulsations of this source are the fingerprints of neutron stars and clearly distinguish them from black holes,” said Gian Luca Israel, lead author of a new paper published in Science, which details the findings.

The data also shows that X-1 is accelerating at a rapid pace. In just over 10 years, the spin rate went from 1.43 seconds per rotation in 2003 to 1.13 seconds in 2014. Scientists said that is the equivalent of knocking five hours off of a day on Earth.

Any change in rotation like this is very rare, but scientists believe it is happening through a process of accretion — meaning it is feeding off the mass of a nearby object that could be anything from a dwarf star to another pulsar.

“This object is really challenging our current understanding of the ‘accretion’ process for high-luminosity stars,” said Luca. “It is 1000 times more luminous than the maximum thought possible for an accreting neutron star, so something else is needed in our models in order to account for the enormous amount of energy released by the object.”

This just goes to show that a new discovery could completely undermine our understanding of the universe in as quick as 1.13 seconds.