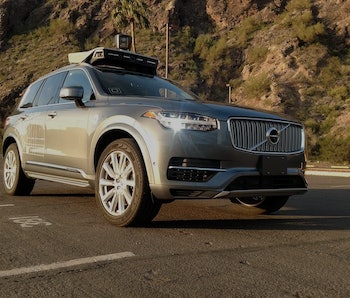 It’s not unusual for somebody who was recently dumped to post pictures of themselves having a great time with a new bae in the hopes that their ex will see it and realize what they’re missing out on. Now, Uber is a multi-billion dollar company and not a jilted lover, but it’s hard not to personify the ride-sharing service a little bit after they tweeted a picture of their self-driving car on the road in Arizona after California kicked them out.

Uber, which is based in San Francisco, was testing its 16 self-driving Volvos in its home state last year until state regulators stepped in to say that Uber didn’t have the proper permits to test their autonomous cars. (It didn’t help that one of the cars ran a red light on the first day of testing). Uber, for its part, claims that it ~technically~ doesn’t need that permit, because there are human drivers in the cars as well (in fact, the company blamed a human driver for running that light).

California didn’t care, and Uber headed to Arizona on the rebound. Arizona was thrilled.

As seen in Uber’s tweet, which was just a picture of a car and a pretty dry caption, the cars are hitting the road in the Grand Canyon State.