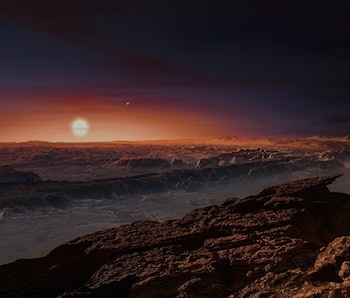 At just 4.2 light-years away, Proxima b, which orbits the star Proxima Centauri, is the closest exoplanet to Earth in the known universe. And better yet, it could be habitable to life! But researchers, armed with new data, just broke some bad news: The planet is prone to horrible cosmic turmoil — the kind which allows oxygen to escape the planet’s atmosphere and drastically reduce chances life can make a home for itself there.

In a study published in The Astrophysical Journal Letters on Monday, an American research team found that although exoplanets orbiting red dwarfs may reside in the habitable zone, stellar eruptions can threaten a planet with oxygen loss. (By “habitable zone,” they mean the zone that is just right for sustaining liquid surface water which could encourage life to grow.)

“If we use expensive telescopes, we need to have a much clearer understanding what we’re looking at and where to look for habitable planets,” Vladimir Airapetian, lead author of the paper and a solar scientist at NASA’s Goddard Space Flight Center in Greenbelt, Maryland, tells Inverse. “This study answers where not to look and where are the bad guys.”

Exoplanets in the habitable zone aren’t necessarily safe and sound — and it seems this especially true when the host star is a red dwarf. Those stars may be prone to ejecting high amounts of extreme X-ray and UV radiation, which can erode the planet’s atmosphere and affect its atmospheric pressure. A loss of pressure means it’s easier for the planet to hemorrhage free oxygen and hydrogen — the constituent elements of water. No water effectively kills off the possibility that a planet can sustain life — or at least life as we know it.

“Water is a universal solvent,” Airapetian says. “From simple molecules to complex molecules, they’re going to be mediated by water. Water is absolutely clinical for development of life. I’m not even talking about sustainment of life. Therefore, if you dont have water, you don’t have life.”

Bad space weather, like solar flares and coronal mass ejections, cause X-ray and UV emissions to break hydrogen and oxygen molecules into atoms and enable their escape. Proxima Centauri, as a red dwarf star, is smaller and cooler, which means the habitable zone is 10 to 20 times closer, but that makes Proxima b more prone to this type of violent space weather.

“This is a star that is much less luminous so it produces less heat overall,” Airapetian says. “Thats a good thing, but the bad thing is the star also produces a lot of X-rays and UV emissions.”

Researchers estimate that this atmospheric escape can make the exoplanet uninhabitable within just a few tens to a hundred million years. Proxima b may be subjected to radiation torrents from superflares about every two hours, which all oxygen will escape in ten million years.

It’s not just lack of oxygen that’s an issue, though. There’s also intense magnetic activity and stellar wind that might be pummeling Proxima b as well. Researchers plan to study the atmospheric erosion of nitrogen, which is also essential to life, on the planet. While a lack of oxygen might make it hard for complex life to evolve and survive on Proxima b, a lack of nitrogen would seriously limit almost any possibility for any life to survive the exoplanet.

More like this
Science
8.2.2022 9:15 PM
Alien friendly? A nearby planet poses a vexing habitability puzzle
By Kiona Smith
Science
8.9.2022 3:00 PM
Aliens could move entire planets to send a math-based code to other civilizations
By Kiona Smith
Science
8.5.2022 12:15 PM
10 years ago, the Curiosity rover arrived on Mars — and revolutionized the hunt for alien life
By Allie Hutchison
Related Tags
Share: