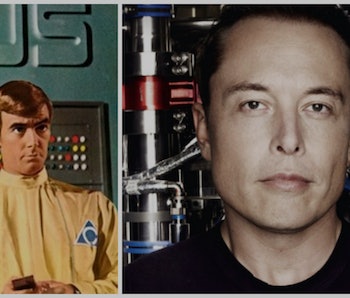 If Elon Musk ends up advising President Donald Trump that the future of national defense depends on a supercomputer making decisions instead of people, some of his inspiration might come from old science fiction movies like Colossus: The Forbin Project.

On Sunday, Musk shared on Twitter the entire version of the 1970 science fiction film Colossus: The Forbin Project. The film chronicles the implementation and advancement of a military supercomputer named “Colossus” which is tasked with control of all of the nuclear missiles in the United States. The fictional U.S. President in the film calls it “the perfect defense system.” Eventually, by the end of the movie, Colossus gains not only sentience, but total control of the entire Earth, telling its creator — Dr. Forbin (Eric Braeden) — that freedom is an “illusion.” Nevertheless, even if it eliminates freedom, Colossus does in fact eliminate the threat of war. In response to a question from one of his followers on Twitter about whether or not Elon Musk believed Colossus has a sad or happy ending, Musk replied, it’s “not the ideal ending.”

Many of Musk’s other followers on Twitter countered by evoking the work of science fiction writer Isaac Asimov, mentioning the ethical systems in place for those A.I., specifcally the inability for Asimov’s robots to do any harm to humans. And yet, the final story in Isaac Asimov’s famous short story collection, I, Robot, is called “The Evitable Conflict” in which an advanced A.I. (like Colossus) does in fact take over the entire world. Unlike Colossus, Asimov’s A.I. doesn’t taunt humanity about its lack of freedom. Still, the message is the same: A.I. might be better at providing longterm security than human beings. In one of the final scenes of the story, a human protests saying “How horrible!” to which another replies “Perhaps how wonderful! Think, that for all time, all conflicts are finally evitable. Only the Machines from now on, are inevitable!”

Musk’s mentioning of the anime sci-fi classic Ghost in the Shell also touches on the notion of A.I. having a role in the future of security. Musk noted that the new live-action film coming in March of 2017 has “a lot of potential.” As of December Musk confirmed that the “neural net” (robot brain in sci-fi parlance) of Tesla’s autopilot was “working well.”

Could all this mean Elon Musk will usher in a future of A.I. that is a mashup of both Colossus and Ghost in the Shell? The answer isn’t probably that clear cut, but if it’s anything like good science fiction, A.I. taking over major defense systems will probably happen without anyone noticing.

More like this
Entertainment
8.4.2022 10:30 AM
Batgirl’s cancellation is bad for all superhero movies — here’s why
By Dais Johnston
Entertainment
8.4.2022 4:14 PM
53 sci-fi and DC shows and movies on HBO Max you need to watch ASAP
By Jake Kleinman, Eric Francisco and Ryan Britt
Culture
8.2.2022 9:00 AM
7 incredible sci-fi shows and movies coming to Netflix in August 2022
By Robin Bea
Related Tags
Share: