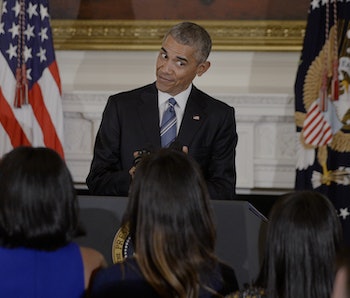 In the final days of Barack Obama’s presidency, many people are feeling a little less than optimistic about the United States’ next Commander-in-Chief. And while there’s a lot of truth in Obama’s refrain that, “We weren’t able to … weaken the resolve of the Republicans to stop opposing us or to cooperate with us,” which he repeated in his January 15 interview on 60 Minutes, he didn’t exactly get nothing done during the past eight years.

This week Obama’s packing up the Oval Office, possibly putting all his stuff in a printer paper box to carry to his car, and handing the presidency over to Donald J. Trump. As America prepares for four years — maybe fewer — under a president who doesn’t seem well-equipped to handle issues involving cybersecurity, climate change, or energy, it’s worth taking a moment to look back at the legacy Obama will leave as he returns to life as a private citizen.

The WRRDA, which reached Obama with bipartisan support in 2014, was an important bill in terms of securing American jobs and restoring sensitive aquatic ecosystems. In his remarks at the bill signing, Obama said the WRRDA “gives a green light to 34 water infrastructure projects across the country, including projects to deepen Boston Harbor and the Port of Savannah, and to restore the Everglades.”

Led the United States Into the Paris Climate Agreement

In the last month of his presidency, Obama imposed a permanent ban on petroleum drilling in 98 percent of federally owned arctic waters. Amid an ongoing debate over whether the United States should continue protecting sensitive arctic habitats or exploit them in favor of domestic energy independence, the president angered the petroleum industry and gave hope to citizens concerned about the health of the global environment.