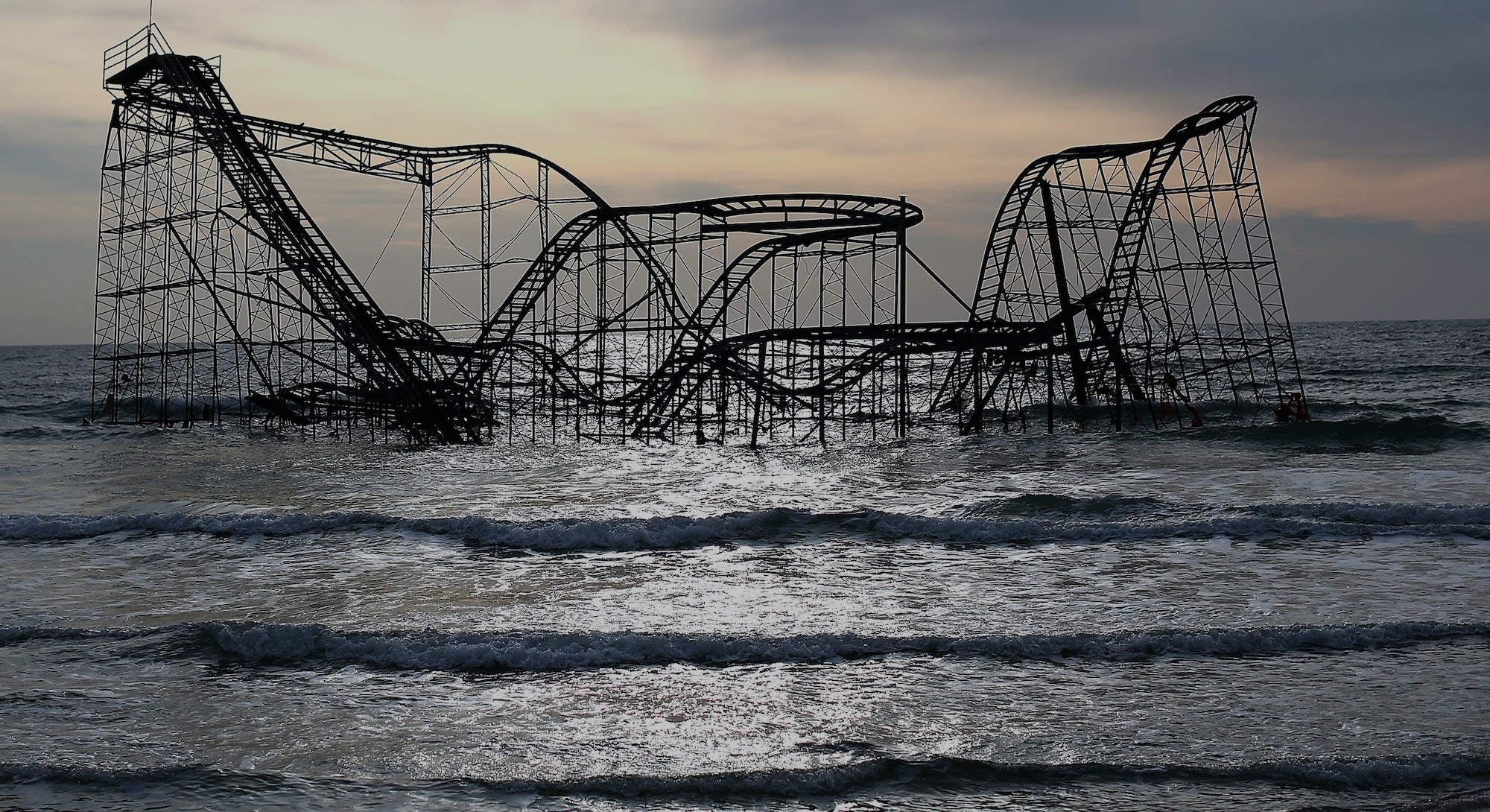 Climate change denial is a strange phenomenon. Given the strong scientific consensus on the reality and urgency of global warming and the international will to take action, the stubbornness of some American politicians giving voice to beliefs that can’t be reconciled with fact is almost without historical precedent.

“We’re really in uncharted territory,” says Aaron McCright, a sociologist at Michigan State University, tells Inverse. “I can’t think of any time in the last couple hundred years where there has been a society in which a large group of people are somewhat impervious to empirical reality.”

When McCright talks about climate change denial, people listen. He’s made a career researching who climate change deniers are, why they deny, and what might make them change their minds. The bad news is that denial of global warming is entrenched very firmly in American political discourse, and no one has yet figured out a surefire way to get it unstuck. Even exposure to natural disasters like hurricanes, made worse by climate change, does little to sway skeptical minds.

McCright doesn’t see much hope in U.S. President Barack Obama’s last-ditch attempts to push for environmental protection before Donald Trump steps into the role. Change, he says, must come from within — and in this case that means within the national Republican Party elite. When enough respected conservative leaders stand behind science, the needle will move. If they fail to do so, a lot of people will have to move back from the coasts.

“I’ve always thought — all we need, to begin with, is four, five or more established conservative Republicans who are willing to put forth an alternative voice to say that, ‘Look, I’ve seen the evidence, I’m convinced climate change is real. I’m a conservative, you can trust me, I want to apply our conservative principles to solving this problem,’” says McCright.

In the meanwhile, he suggests that the best way to understand denial is by understanding the system that supports a belief without basis.

Who Benefits From Denial?

It is rational for certain companies and industrialists to deny climate change whether or not they believe in it. Those who have benefited most from industry tend to be those most insulated from the risks of climate change and, as such, have personal motivation to maintain a market status quo.

McCright discussed this phenomenon in a widely cited 2011 paper published in Global Environmental Change, pointing to a “conservative white male” effect. People who meet that demographic description are more accepting of risk in general and of climate change risk in particular. It’s not surprising that high-profile deniers are almost exclusively conservative white men, since they have most benefited from the industrial capitalist system, and therefore have the most skin in the game when it comes to protecting the powers that be — even if they aren’t those powers.

Why Do Deniers Deny?

The leading theory to explain why climate change denial exists at all is called the anti-reflexivity thesis. That’s just fancy words to describe how defenders of industrial capitalism have risen up to protect that system from those who would change it, in light of its environmental and social costs. Accepting that climate change is real and bad is fundamentally harder to do for those who have benefited from industrial capitalism, which runs on cheap fossil fuels. It’s doubly hard for conservatives, who by definition tend to resist change more than liberals.

“It’s just much more challenging to their worldview, especially in this time period of everything in flux — the global economy is changing, our place in the world is changing, and here is this global problem that all these scientists around the world are saying is caused by emissions, and we historically have been the largest emitter,” says McCright. “The United States looks like public enemy number one, and so accepting climate change means, ‘Boy, we screwed up. We caused a lot of problems, and it’s our responsibility to solve them.’ That’s a hard pill to swallow for a lot of people.”

Climate change is a side effect of industrial capitalism. Industrialized nations were built with energy from cheap fossil fuels, and this released enormous amounts of greenhouse gasses into the atmosphere. This is what economists call an externality — a consequence that is not built into the cost. There are market solutions to externality problems, like carbon taxes or carbon trading schemes, which incentivise industries that don’t pollute as much. These are the sort of solutions that conservatives tend to like, but implementing any solution means acknowledging the problem in the first place.

How Did Denial Become an Agenda?

Climate change denial isn’t just about people individually weighing the facts and coming to their own self-interested conclusions. For a quarter of a century, there has been an organized climate change denial machine in America working to sow doubt and delay action to control greenhouse gas emissions. Of course, industry will resist regulation that makes its operations more expensive. Fossil fuel companies have led the climate change denial charge and funded efforts to discredit the science, knowing full well the facts of emissions and global warming.

If climate change denial were purely a matter of protecting economic interests, though, it’s almost certain we wouldn’t be where we are today. Denial, in the United States, has become a matter of ideology.

This dates back to the late 1980s, says McCright, when it became pretty clear that there was no persistent Soviet threat. Conservatives needed a new bogeyman, and they found it in the environmental movement. “Green is the new Red,” became a common phrase in the conservative magazines of that era. Rather than suggesting that America strip away protections designed to keep air and water clean, commentators and pols railed against controls on less visible threats, like pesticides, ozone holes, and global warming. Cries for environmental regulation were twisted into calls for socialism and the end of economic progress.

How Can Believers Change Nonbelievers’ Minds?

Twenty-five years of us-or-them is pretty hard to overcome. Sure, on an individual level, you might change a couple minds by meeting people where they are and speaking their language, but this problem will take something much bigger to solve. Democrats don’t emerge blameless from this story either — every attempt to cast climate change deniers as anti-science idiots is met with predictable backlash. That backlash, maybe, is epitomized by the election of Trump, who so far seems inclined to fill his cabinet with climate change deniers in a misguided attempt to revive the coal industry.

Ironically, McCright thinks we’d be in a much better position on climate change today if John McCain had beat out Obama in the 2008 presidential election. McCain acknowledged the reality of climate change and promised to do something about it if elected. His election might not have seen the same resurgence of the climate change denial machine that Obama did, McCright says.

Or, maybe, the wheels might have been set in motion even earlier. “The real sad thing about all this, in retrospect, is if we didn’t have the denial machine or whatever you want to call it, and we went back to 1991, and George Herbert Walker Bush was president, and we just decided to do something about climate change — very moderately or modestly — we’d be in a much different situation today, and maybe at a point where we don’t even have to worry about large, command and control legislation,” says McCright. “We could have done voluntary emissions reductions, market mechanisms, much earlier, get the problem under control, and we’d never be in a situation now, where it’s almost heavy command and control or bust. Nothing subtle is going to solve this.”

McCright keeps a list of prominent Republicans who seem likely to become leaders on climate change. Bob Inglis, who lost his seat in Congress after acknowledging global warming, is on it. So is Jon Huntsman, who made a failed bid to become the Republican presidential nominee in 2012. There are a small handful of others, but it’s not an incredibly long list. Believing in climate change is a political liability on the right.

Still, McCright hopes that prominent Republicans who believe in climate change will out themselves and alter ideas within their party and within their party’s base. If that doesn’t happen, the dialogue between reason and suspicion will take place between politicians up to their necks in swamp water.