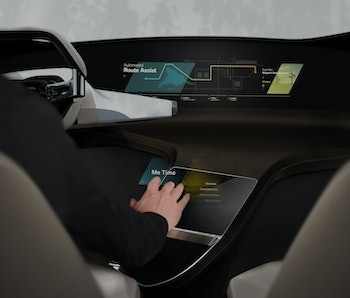 BMW announced Thursday a new HoloActive Touch system that would allow drivers to interact with holograms next to their steering wheels. This system would make it easier to control apps in a vehicle’s dashboard, which could reduce accidents caused by distracted drivers until autonomous cars make it so nobody has to keep their eyes on the highway.

HoloActive Touch works by projecting holograms that people can tap, slide their fingers across, and otherwise use as if they were a touchscreen. BMW says the system will even provide tactile feedback to let people know they aren’t just gesturing at the air. That’s right — cars of the future are going to sport interactive holograms that can touch their drivers right back.

The system is an evolution of other gesture-based interfaces BMW announced in 2015 and 2016. The most recent, AirTouch, let people control a system reflected onto the windshield via gestures and a button on the steering wheel. HoloActive Touch iterates on that concept with its floating holograms and by letting drivers interact with apps without touching anything.

Here’s a demonstration of AirTouch from CES 2016:

HoloActive Touch could make it easier to interact with software — whether it’s a navigation tool, streaming music service, or some other app — without requiring people to fumble with their smartphones. This would let them keep more of their focus on the road, which could in turn let BMW address one of the biggest problems of modern highways.

The National Highway Traffic Safety Administration proposed new guidelines in November to ask smartphone manufacturers to cut down on distracted driving. The agency said 10 percent of 35,092 traffic fatalities in 2015 and 16 percent of the 5.6 million non-fatal crashes in 2014 involved at least one driver who was distracted in some way.

NHTSA proposed a “Driving Mode” similar to Airplane Mode that would have phones disable certain functions when used in a car. The agency also said that smartphones could limit interactions to less than two seconds — less than one-tenth of the time people currently spend using their phones whenever they send or receive a text message while they are driving.

This won’t be a problem when fully autonomous cars hit the streets. Everyone from Tesla and Uber to Mercedes and Rolls-Royce — among many others — wants to bring self-driving vehicles to consumers within the next decade.

When that happens, cars will become an equal mix of transportation system and entertainment center. Until then, however, something like HoloActive Touch could allow people to split their attention between what’s happening inside and outside of their vehicles without putting everyone else driving around them in danger.

BMW plans to demonstrate HoloActive Touch at CES 2017 in January. The company didn’t say when the system might be used in a vehicle — the gesture controls revealed in 2015 made their way to BMW 7 Series and BMW 5 Series models, but AirTouch has yet to debut. Inverse emailed BMW to learn more and will update this post if it responds.