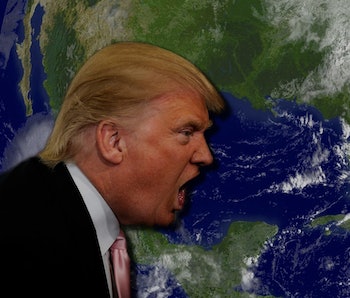 President-elect Donald Trump is going to be very, very bad for the environment. Trump, who infamously declared that climate change is a hoax created by the Chinese, has stocked his administration with fossil fuel executives and climate change deniers, and threatens to undo any progress the Obama administration made. Scientists are, understandably, worried, and that’s why they’re making a mad dash to backup mountains of public government climate change data on backup servers before Trump has a chance to scrub it.

The Trump administration hasn’t stated outright that it’s going to take down all this invaluable data. But, as The Washington Post reports, it would make a certain amount of sense. Trump and his team have discussed putting a stop to NASA’s vital climate change research, and they’ve requested a list of all the people at the U.S. Energy Department who have worked on climate change (the department denied this request, perhaps delaying a purge). If Trump and his cronies think climate change is all bogus to begin with, why bother keeping government data that contradicts the official party line on the web?

Should the worst-case scenario happen (or continue to happen, if we’re being real about it), a group of scientists has already launched an effort to back up the data, which includes records on rising sea levels and the number of wildfires every year. Meteorologist Eric Holthaus helped get the ball rolling on Sunday when he tweeted out a call for concerned experts to put all of the climate data that they’re worried about in a Google spreadsheet so that it could be efficiently cataloged.

This isn’t the only effort to save data that might help save the planet. Experts at the University of Pennsylvania are looking for ways to harvest the data, and a group of researchers are hosting a “guerrilla archiving” this weekend, the Post reports.

While the efforts to copy all of this climate change data are important precautions, Trump probably won’t pull the plug on everything. He almost certainly will, however, do everything he can to stop funding any future science on climate change, as he already he hinted he would with NASA. That scientists are making this effort to backup data at all goes to show just how grim things are looking.

It’s not the first time that internet users have taken preemptive action to protect the web from Trump. The Internet Archive wants to create a backup in Canada where U.S. censorship laws wouldn’t apply, meaning the archive would be safe from Trump’s grubby hands.

More like this
Science
8.10.2022 3:27 PM
Climate change may push North America’s forests to a “tipping point”
By Tara Yarlagadda
Mind and Body
8.16.2022 1:30 PM
These 10 common foods have the smallest environmental impact: study
By Jennifer Walter
Science
8.5.2022 6:00 PM
How is nature connected to well-being? It's complicated, scientists say
By Tara Yarlagadda
Related Tags
Share: