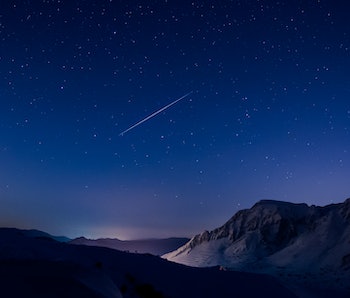 December’s annual light show, the Geminids meteor shower, will be a little less spectacular this year, because a massively bright supermoon will pretty much upstage the whole thing. But if you can find dark, clear skies, there’s still a chance you’ll spot a few meteors.

The Geminids are named for the constellation they appear to originate from, Gemini. The meteors are debris from 3200 Phaethon, a tiny rocky comet, which orbits the sun every 1.4 years, just in time for our planet’s atmosphere to clip the comet’s debris tail every December. When that happens, the little bits of comet dust light up the sky in a shower of “shooting stars”. The Geminids shower is known for being one of the brightest shows of the year, especially in the early morning.

Last year’s meteor shower peaked at about 120 meteors per hour, but thanks to the supermoon, NASA says you’ll be lucky to see a dozen in an hour this year. The supermoon will be five to ten times brighter than the space debris burning up in the atmosphere, making the night’s fireworks pretty hard to see. However, the supermoon will be at its brightest around 7 p.m., while the meteor shower peaks at about 2 a.m., so if you’re willing to stay up and get away from city lights, you might still catch the show.

In some places, the first meteors in the shower are already coming down:

If the thought of staying up or heading outside in the frigid cold sounds awful, you can always live-stream the meteor shower over on Slooh. Or you can wait for the Quadrantid meteor shower, which peaks on January 3 at about 40 meteors per hour. It will still be cold outside, but at least there won’t be a full moon to get in the way.

More like this
Science
8.2.2022 4:45 PM
Perseids, Supermoon, and more: 4 August 2022 sky events you don't want to miss
By Jennifer Walter
Science
8.14.2022 7:00 PM
Do aliens exist? Jupiter’s moon Europa could hold the answer
By LAURENCE TOGNETTI and Universe Today
Science
8.13.2022 10:00 AM
How the Webb Telescope could unveil the newborn universe
By CAROLYN COLLINS PETERSEN and Universe Today
Related Tags
Share: