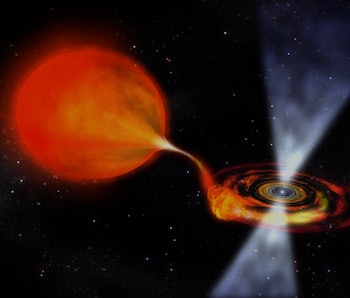 An amateur astronomer, with support from a professional astrophysicist, just helped reveal the presence of star spots located in a fast-spinning pulsar binary system — the first time such a detail has ever been recorded there.

This millisecond pulsar, or MSP, has a strongly magnetized companion star; together, they comprise the pulsar binary system. It’s on the companion star that John Antoniadis, a Dunlap Fellow with the Dunlap Institute for Astronomy & Astrophysics, University of Toronto, and André van Staden, an amateur South African astronomer, identified star spots. Their results will be published this month in Astrophysical Journal.

Star spots are the same as our own sun’s sun spots — just, you know, on a different sun than our sun. They only occur around stars with strong magnetic fields, like the companion star in this particular system, but had still never been successfully observed before. These particular spots are comparatively much larger than our own sun’s sun spots, and they actually lower the companion star’s overall brightness, which is what drew the research duo’s attention.

Van Staden realized some time back that he was ideally situated in South Africa for observing the binary system, which goes by the name of MSP J1723-2837 and lies about 2,500 light-years away. Lacking the resources to sufficiently study it on his own, he contacted Antoniadis, who had access to the kind of instruments the project would need.

“The dataset was unlike anything I had ever seen,” said Antoniadis in a press release on receiving van Staden’s data, “both in terms of quality and timespan. And I urged André to continue observing for as long as possible.”

The cool thing about the companion star is that it’s not tidally locked into orbit with the pulsar, the way our moon’s orbit is locked to the Earth’s. Rather than its rotational period and orbital period being in sync, its orbital period is a little short, which gives its light the appearance of a curve.

In star pairings like this, it’s often the case that one will eventually devour the other, leading to nicknames like “black widow” binaries. In order to understand how the complex and mysterious relationship between these pairs evolves, we need to understand star spots like the ones van Staden and Antoniadis just found.

We’ve generally thought that stellar wind was responsible for helping the pulsar “turn on and off,” meaning intermittently erode its companion, but the new data suggests it might be the companion’s magnetic field itself that affects the process. The duo found star spots, but they found no evidence of a “hot spot” that would be created on the pulsar-facing side of the companion star if stellar wind and radiation was driving the cannibalization. We still don’t fully understand the process, but now we know where to look.