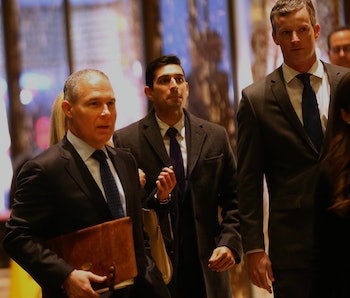 While a step up from Myron Ebell, the climate-change skeptic leading Trump’s currently transition team, Pruitt’s done much to cast doubt on scientific reports that show that human activity — namely carbon emissions — are heating up the atmosphere.

The former state senator is flush with cash from fossil fuels companies — which have been put under increased scrutiny since the 2010 Deepwater Horizon explosion and before that, the election of Barack Obama. Pruitt has also sued the EPA a number of times on behalf of the state of Oklahoma.

Below are a few interesting things Pruitt has said about our increasingly hot planet that’s protected by a clogged, veryfuckingthin atmosphere, which is our only protection from the instant, cold death of space.

“Scientists continue to disagree about the degree and extent of global warming and its connection to the actions of mankind. That debate should be encouraged in classrooms, public forums, and the halls of Congress,” Pruitt wrote in a May op-ed in the National Review.

Pruitt on the EPA and State’s Rights

Regarding a series of lawsuits from the state against the EPA, Pruitt affirmed in a 2013 speech that the role of the EPA “secondary” is to that of states. In the same speech he accused the EPA of colluding with environmental groups like the Sierra Club through “consent decrees,” allowing the agency to bind itself to regulations not passed by Congress:

Pruitt on the Clean Power Plan

“The Clean Power Plan is an unlawful attempt to expand federal bureaucrats’ authority over states’ energy economies in order to shutter coal-fired power plants and eventually other sources of fossil-fuel-generated electricity,” Pruitt said in a statement in 2015 after filing a lawsuit to stop the measure.

In a speech to the Federalist Society, during which Pruitt tore down the Clean Power Plan, he said: “I believe the EPA has a very valuable and important role to play in the regulation of the environment. There are air quality issues, there are water quality issues across state lines — and that’s something we need to keep in mind as we engage in these discussions but this is a rule, this is an effort that is extraordinary in cost and extraordinary in scope.”

So Pruitt doesn’t think the EPA is all bad — just that it costs too much money to function.