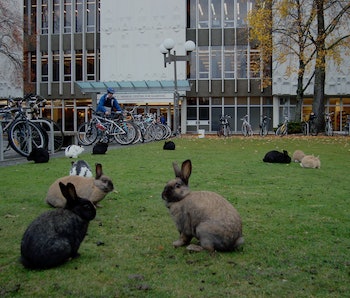 Nations around the world spend a great deal of time and energy figuring out what sort of humans should be allowed to cross their borders, and in what numbers. This is mostly wasted effort, not only because there are much bigger things to worry about, but also because the real immigration threat tends to come in much smaller packages. Often, it’s organisms with barely a central nervous system to speak of that pose the most danger to national security.

Invasive species are, definitely, a global problem. The world’s current extinction rates are so high that many scientists are arguing that we’ve entered Earth’s sixth mass extinction. There are a lot of reasons for this — climate change, landscape destruction, but also invasive species.

And yet, the science of invasion biology is in turmoil, according to an article recently published online by Trends in Ecology and Evolution. “The discipline suffers from a combination of internal strife and poor public communication,” the authors write. “Despite the magnitude of this threat and recent scientific advances, this field remains a regular target of criticism — from outright deniers of the threat to scientists questioning the utility of the discipline.”

It starts with a definitional problem: what counts as an invasive species? Most definitions only count organisms that have a negative impact on the environment where they have been introduced, but you can’t make that call unless you have the science to back it up. Are species invasive if they came on their own — say, forced into new ecosystems by climate change — or only if humans are to blame? And should we treat those two things differently?

Even if it’s quite clear that a species is invasive and causing harm, it’s hard to know what to do about it. Programs to control invasive species are typically expensive and not terribly effective. Some invasive species, like feral cats or rabbits, are all but impossible to target because killing cute animals is political suicide. It’s easy to argue that invasive species are by their nature difficult to control, and therefore we shouldn’t try. Or, that it’s not right to punish invasive species if humans are to blame for their spread.

The problems of defining, measuring, communicating, and managing invasive species risk are many, but the conclusion that we should walk away from the issue does not follow. Climate change science is hard, but that doesn’t mean it’s OK to ignore it. And like climate change, the basic conclusion that invasive species pose a real and serious threat to global ecosystems is a matter of scientific consensus.

The solution for invasion biology is in equal parts better science and better communication. If we can get to better estimates of the scale of the problem, it becomes a lot easier to determine an appropriate level of response.