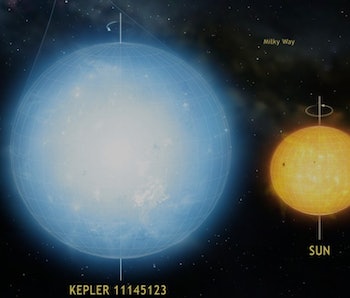 The star, which scientists think is the most perfectly round object in the known universe, is more than twice the size of our sun, but significantly less fat around the middle. Even though the star’s average diameter is about 2 million miles, it’s only around 4 miles bigger at the equator than at the poles.

Germany’s Max Planck Institute for Solar System Research published a study on Wednesday in Science Advances, explaining the incredible roundness of Kepler 11145123. The study’s lead author, Laurent Gizon, explained that stars are not perfect cue balls, since they flatten out around the middle due the to effects of centrifugal force as they spin.

The study claims that the distant star is “the most spherical natural object ever measured, more spherical than the quiet Sun.”

Our own sun, which has an average diameter of just under 865,000 miles, is 4 miles wider around the middle. Earth, meanwhile, has even more of a belly, since out home planet is 13 miles wider at the equator.

To determine just how rotund Kepler 11145123 was, Gizon and his team measured it from the Kepler space observatory using a technique called asteroseismology, which studies oscillations in the star. The method allowed astronomers to tell how big (and round) the slow-moving star was with an unprecedented degree of accuracy.

Scientists think the reason behind Kepler 11145123’s perfect shape has to do with the star’s weak magnetic field.

“This work is a first step in the study of stellar shapes through asteroseismology,” the study says, noting that the scientists behind it would like to apply these techniques to other stars. “An important field of theoretical astrophysics is now also observational,” it explains.