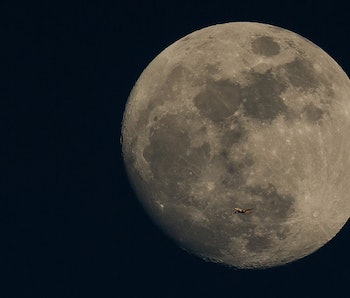 This year has been rough, but 2016 has at least one very cool, very good thing left in store. On Monday, November 14, there’s going to be an extra rare supermoon. It’s going to appear extra big because the moon will be closer to Earth than it has been in almost 69 years.

According to Sky & Telescope, the centers of the moon and Earth are going to be just 221,524 miles apart at 6:23 a.m. Eastern on Monday, and the moon will be exactly full at 8:52 a.m. Because the most extreme aspects of the astronomical event are taking place in the early morning for most of North America, the supermoon will probably look the biggest and best on Sunday night, November 13.

The moon will appear 7 percent larger across and 15 percent greater in area than normal. It will also appear 16 percent brighter, since Earth is currently a little closer to the sun than normal. It all sounds pretty cool — and it is! — but keep in mind a 15 percent increase isn’t going to be all that drastic, though you should be able to notice a difference if you’re paying attention.

Still, it’s pretty wild to think about just how much the moon changes in the sky. While a 15 percent change from the average moon isn’t mindblowing, the difference between a supermoon (technically a perigean full moon) and the moon at its smallest (apogee). That’s a 30 percent difference, and you can tell.

NOAA’s National Ocean Service says certain areas of the world — like the Alaskan coast — might see higher tides than normal because of the supermoon, but it would be a 2 percent increase, so maybe don’t bust out the scuba gear.