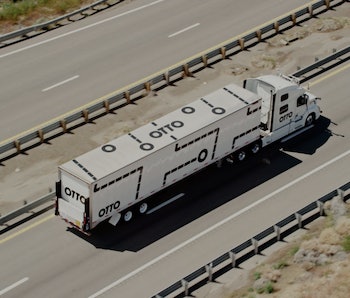 There are many symbolic products that could have been selected for the world’s first autonomous tractor-trailer delivery. Humanity chose beer. A self-driving tractor-trailer in Colorado just delivered 50,000 cans of Budweiser.

Wired describes the trip, in a story published Tuesday, as including the truck’s driver steering onto the Interstate from the brewery — and then climbing out of his seat to wander around and joke about doing yoga.

The souped-up truck comes from Uber-owned startup Otto, which wants to make things easier for long-distance truck drivers, though there’s been a considerable amount of robots-are-coming-for-our-jobs concerns as well.

But Uber maintains that those in the industry don’t need to be worried about job security — the autonomous technology only works once the truck is on the highway, where there are fewer external elements to contend with. It will handle the long, empty stretches, while the driver takes care of parking and dodging suburban jaywalkers.

Truck drivers operate on brutal hours and are often pressured to reach their destinations by deadlines that don’t allow for much sleep, which has in turn created a hazardous subculture of amphetamine abuse, so widespread commercialization of this technology could cut down on accidents, as well as simply make their lives a little more restful.

Manual transmissions are apparently not suitable for the future, but Otto’s hardware can adapt any automatic truck. According to Wired, the technology is barely noticeable from a visual standpoint. Otto’s decision to focus on self-driving trucks — as opposed to cars, which have been getting most of the publicity as of late — is simply a response to identifying the area of greatest need. The trucking industry is desperately overworked and understaffed.

When it launched at the beginning of 2016, rather than put all its resources into long-term goals, Otto aimed to put working prototypes on the road as soon as possible, and continually update the hardware in real time, and that’s exactly what it did — starting with 50,000 cans of beer.

More like this
Innovation
3 hours ago
This self-healing material could fix your dinged-up car in 30 minutes
By Molly Glick
Science
4 hours ago
Is my dog depressed or happy? Pet experts explain how you can tell.
By Tara Yarlagadda
Science
2 hours ago
You need to see Saturn at its closest and brightest this week
By Joseph Malcomson
Related Tags
Share: