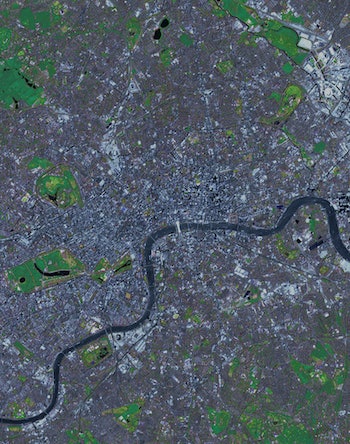 Start your commute on the M25, London’s aging orbital highway, and your license plate will be registered before the exit you take is recorded. As you park, a CCTV camera will watch you buy a parking ticket. Head to a tube station and your Oyster card swipe will be logged and recorded. Wander through the labyrinth of interconnected tunnels that makes up the oldest subway system in the world and you will be tracked using facial recognition software.

Welcome to London, the city that never sleeps because it’s too busy watching you.

“Mass surveillance is a prominent part of counter terrorism strategy with the use of CCTV and other forms of monitoring,” says Lee Marsden, head of politics at the University of East Anglia. “In a city like London, with a dynamic, diverse, and multicultural community, this challenges social cohesion, particularly where it leads to mistrust and is seen as being targeted at certain ‘suspect’ communities.”

That challenge has arrived at a unique moment in England’s political and social history. Since June’s referendum vote for Britain to leave the European Union, the incidence of hate crimes in London has risen by 164%. In the wake of the Brexit decision, Theresa May — arguably the country’s most vocal and dedicated supporter of video surveillance and mobile phone tracking — has risen to the role of Prime Minister.

Since London’s riots in summer 2011, private contractors have been brought in by the city’s Metropolitan Police force to systematically link and index surveillance footage across all devices in the capital. The aim is to build a comprehensive database of all public movements. Images from CCTV, social media, and body cameras worn by police are being archived and made searchable at the click of a button.

Whether or not the system functions effectively, it represents a shift in the relationship between the governed and the government.

In this culture of mistrust, everybody becomes a suspect. Even garbage cans have been modified with chips that identify and record data from pedestrian’s smartphones as they wander by. Eavesdropping devices known as IMSI-catchers have been detected across key areas in the city, including Britains parliament. These surveillance tools pose as telecommunications towers in order to intercept data, phone calls, and messages — yet nobody is allowed to know who’s operating them, or even that they exist.

The justification for the surveillance measures is threefold: national security, to enforce the law, and to benefit the “economic well-being of the UK.” That last one is particularly pernicious in a city that is still, ostensibly, the financial capital of Europe. Using technology for state-backed corporate espionage has become a new norm.

“On the back of over-emphasizing the terrorist threat, the government are able to increase control over the population through increased surveillance. This is accepted when threats are perceived as credible, and enables authorities to seek to reduce other criminal behavior and civil disturbance,” says Marsden. “In a society where lives are lived out in the glare of social media sharing, self-surveillance desensitizes populations to increasingly invasive mass surveillance by the state.”

London is also a city of vast and growing inequality. Increasingly, it is the wealthy that support greater measures for surveillance, both because of the enormous amount of profit companies stand to gain from commodifying data, and the perceived safety that it affords those who can afford a stake in the game.

“It’s not all black and white, but there’s a sense in which if you think the institutions are likely to understand your predicament, you’re less likely to fear the result of arbitrary intervention of data,” Killock explains. “People who tend to be in favor of surveillance tend to be very much those with the most to lose. Polling suggests that people who are relatively well-off trust the government on these issues more than those on the lower end of the spectrum.”

Regardless of the outcome of the case, it could represent the last time European laws can be used to hold the British government to account over invasions of privacy. So what does this mean for London’s surveillance epidemic?

As Killock puts it: “There’s potential for things to get a lot worse.”