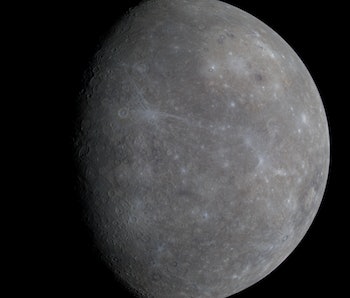 On September 28, Mercury will make one of its finest appearances of 2016. That’s when it will be at its greatest western elongation of 17.9 degrees from the sun. Mercury will emerge at dawn — 6:22 a.m. on the East Coast of America — making it the perfect time to catch a glimpse of the planet as it reaches its highest point above the horizon.

Mercury has put on quite the show this year. In May, we witnessed the transit of Mercury, a once-in-a-decade event when the planet travels between the Earth and the Sun. Now we’re about to catch it at its greatest western elongation, or the maximum angular distance west of the Sun. Elongation is the angle configured between the Sun, a planet, and the Earth. On September 28 Mercury will be basically a giant interplanetary right angle. For about a half an hour during morning twilight, Mercury will hover just above the eastern horizon, giving stargazers in mid-northern latitudes — who don’t have to deal with light pollution, that is — the perfect view of our solar system’s smallest planet.

Greatest elongations happen six to seven times a year, and they occur an hour and 50 minutes after Mercury has reached perihelion, or the point where the planet is closest to the sun. Elongations toggle between the east and west of the Sun. This means that during eastern elongation, Mercury can be seen on the western side of the Sun, and for western elongation, the planet will be hanging out in the eastern sky.

Since Mercury is so close to the Sun, it’s usually impossible to observe from Earth.

However, elongations happen in tandem with Mercury’s phases, and as Mercury continues to orbit and gets closer to Earth, the more visible the planet becomes. At its greatest elongation, Mercury’s surface will be 50 percent illuminated.

Although Mercury will continue its trek back towards the sun after September 28, the planet will remain visible to all earthlings for the next couple of weeks. It won’t be until December that we can catch the final greatest elongation of 2016.