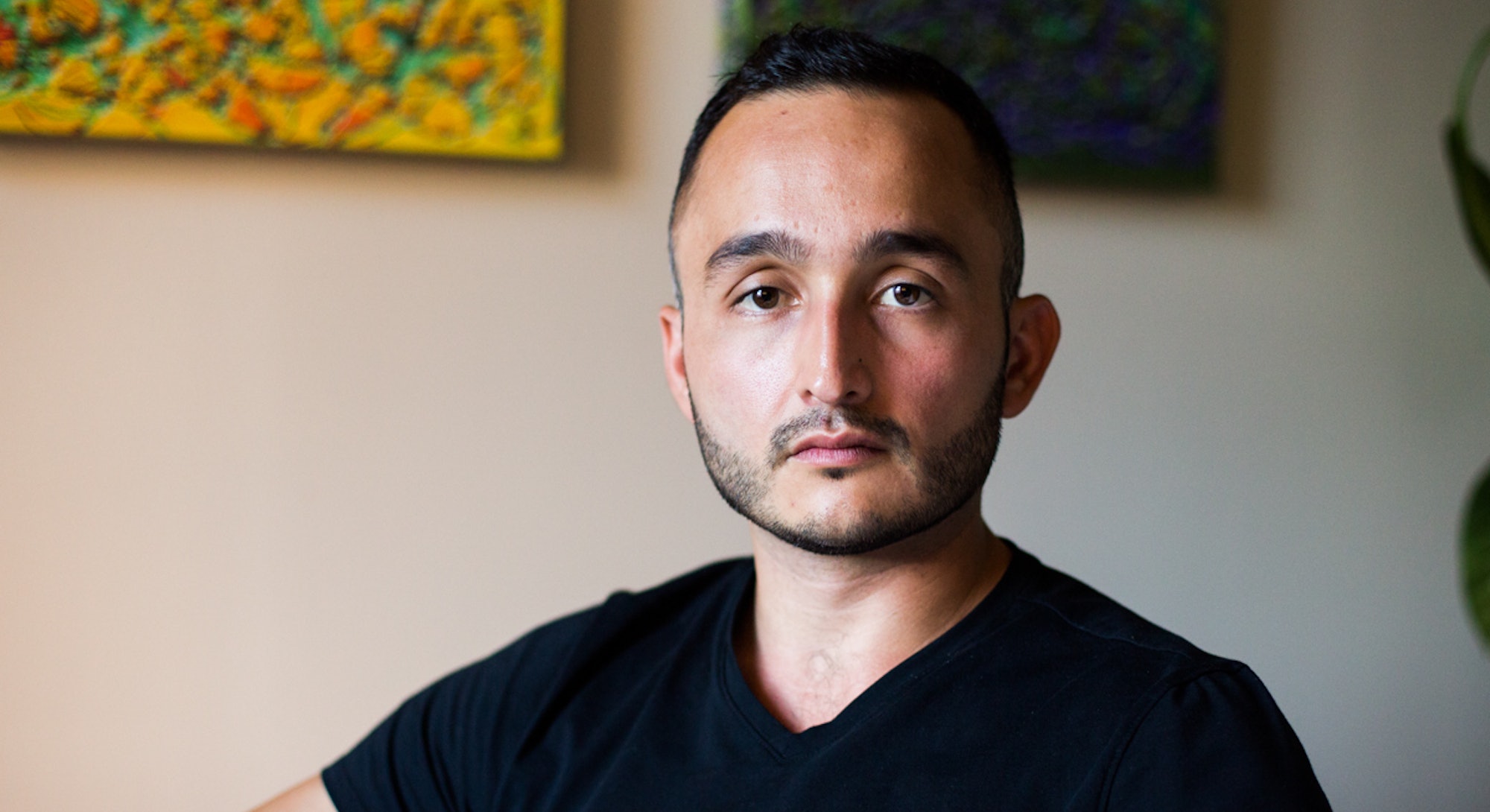 It had been two months since ISIS executed more than 160 Syrian soldiers at Tabqa air base. Joseph Adams was sitting at his desk in Amman, Jordan, sifting for clues about it on YouTube and Twitter.

ISIS fighters were later seen “parading in the town of Tabqa with the severed heads of soldiers killed at the air base,” reported the Wall Street Journal. But Adams had questions: How many people were killed? Were some of the victims children, as he had heard? There were, perhaps, answers hidden in the metadata of social media posts. As it stood, not much was known about what happened in Tabqa.

“There were all these competing narratives at the time,” Adams tells Inverse. He relied on YouTube and other social posts to determine location, based on the direction of the sun and cross-referencing that with the satellite data to determine a time, among other sleuthing tactics.

“If someone would pan the camera around I would know the twist of a road, or I could look at GoogleMaps and determine where I found it,” Adams recalls. “I used social media to verify the massacre.”

Adams published a two-part report for Syria Direct, the media outlet he was working with at the time. Syria Direct, which receives funding from the State Department, focuses exclusively on the Syrian Civil War, and trains Syrian refugees who have fled to Jordan the tools and techniques of reporting so they can contribute to the site’s coverage.

Analyzing the data is always going to require a skilled human researcher, but Adams realized if he could speed up the initial, location-specific data collection, he could save a lot of time and energy. He had to search through several social media platforms, look at multiple users, and then parse the data. It was labor-intensive and slow-going.

“I said, ‘if I could have something up-front that would help me with that initial discovery phase, the search-and-monitoring phase; that would be very helpful for my purposes and other open-source users I was tweeting a lot with,’” he tells Inverse.

That something didn’t exist for someone on a budget. So, Adams, who doesn’t have any formal coding background, recruited Cookies HQ, a development team in England, to help build that something. The result was WarWire, sort of a newsfeed of social media posts from war zones.

WarWire is a browser-based program that allows users to easily search geo-tagged social media posts by location or keyword. The program is aimed at journalists and researchers who need to report on and analyze a conflict zone that’s too dangerous to physically monitor.

The version of WarWire shown to Inverse seems straightforward and intuitive. Imagine looking at Google Maps, choosing the size of the area you want to collect data from, and voila — you’ll see posts across the major social platforms: Twitter, Facebook, Instagram, YouTube, and Vkontakte (Russia’s main social network). In addition to the geolocated search options, WarWire has a “list” function that Adams describes as a cross-platform version of Tweetdeck.

WarWire uses free, publicly available data from the social media giants, which results in a trade-off for Adams. He doesn’t get the granularity that some more expensive services get, but he can keep costs lower. He hopes to launch the site to the public by the end of the year. (WarWire’s in beta, but interested individuals or groups can request an invitation.)

“What WarWire allows us to do is find reports coming from the ground in the aftermath of incidents, and also gives us another way to search for images and reports we can use to verify claims being made by various sources,” Eliot Higgins, founder of Bellingcat, tells Inverse. His group uses open-source material and social media to investigate conflict zones and corruption, and was an early adopter.

“Verification is core to anything we do, and when we’re trying to verify an incident we need reports and images coming from the ground, and we also need images from an area […] to confirm images claiming to be from the incident actually match the various features visible in an area,” Higgins tells Inverse.

Adams’s former colleagues at Syria Direct have been using his new service, too. Kristen Demillio, executive editor of Syria Direct, says the conditions in Syria are so dangerous that she and her team have to rely almost exclusively on remote reporting, and need to find ways around the shortcomings that limitation imposes.

“The challenge is in not being on the ground, as I have in other war zones,” Demillio tells Inverse. “What’s frustrating is that I and the reporters can’t go out and do the stories that we necessarily want. WarWire means eyes on the ground, albeit from a distance.”

Demillio sees the app as a way to hold the United States accountable for its actions as well. “It is necessary because America and other countries can no longer conduct dirty wars unwatched,” she says.

Admittedly, WarWire raises the same concerns about privacy as all social media. The ability to instantaneously Hoover up data from a single neighborhood or 20-mile region is impressive. Governments, law enforcement, and large corporations across the country and the world already have far greater capabilities than what WarWire offers, but anything that makes mid-scale data collection easier needs to be scrutinized.

WarWire only collects what social media users have posted publicly and geo-tagged, so there’s a strong argument that since the program is only collecting data that’s already available, it doesn’t introduce any new issues. At the same time, making cross-platform digital surveillance more readily accessible could have the unintended consequence of expanding the total number of mid-level watchers in the world. As but one example, it’s easy to imagine a small college president could use WarWire to monitor all social media posts on campus at a low cost.

That “would be possible, and would not exactly be what we built WarWire for,” Adams said. “But so long as the use is of course legal, and falls within the bounds of the terms and conditions of both WarWire and of each platform that we’re collecting data from, then we’d be okay with, for example, helping keep a college campus safe.”

But if governments and corporations already have a more powerful type of this technology, why shouldn’t journalist human rights activists have their own version? In the event of a police crackdown on, say, Black Lives Matter protesters, activists could more easily find all of the relevant videos from the incident.

It’s not that simple, say some privacy advocates. “Information is power,” Kade Crockford, director at the Technology for Liberty Program at the Massachusetts ACLU tells Inverse. “This kind of technology offers information. If the proprietor sells it to regimes that violate human rights, those regimes will use it to violate human rights whether in Egypt, where that means torture, or in the United States, where that means police spying on and perhaps harassing Black Lives Matter activists.”

Adams is open to giving cops and federal agents access to WarWire in some circumstances. “We wouldn’t have a problem with the U.S. government or law enforcement having access to WarWire, but only for public safety, say assessing the extent of damage in a disaster,” said Adams. “But it shouldn’t be used to conduct surveillance, or obtain information that would require a subpoena or court order.”

Adams got his seed funding from a Jordanian startup incubator called Oasis500, which was founded in 2010 to spur investment in Arab-created tech companies. Following President Barack Obama’s 2009 Cairo speech, the State Department created an initiative called the Global Entrepreneurship Program, which then helped facilitate Oasis500’s successful launch, led by Dr. Usama Fayyad, formerly Yahoo!’s chief data officer and executive VP. It’s not clear how much funding, if any, the State Department has provided Oasis500. (Neither responded to a request for comment.)

Adams, who is fluent in both Spanish and Arabic, puts in time on WarWire while balancing a day job in business consulting. He speaks about WarWire with passion, and isn’t afraid to sound idealistic. “The deeper motivation that got me into journalism and developing WarWire is simply an interest in the truth, in life in all its shades, and in using whatever tools and sources I have at my disposal to precisely understand and communicate it,” he said.

“When going about my investigations, I knew there was a way to do it faster, better, and cheaper. If along the way I could also help out other open-source journalists and analysts experiencing similar challenges, or even help document or respond to a crisis, I would be happy.”