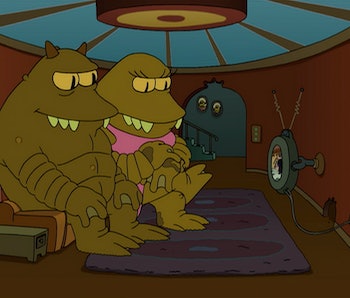 It’s one of the go-to ways to understand how we broadcast our presence to the wider universe: The premiere of I Love Lucy aired in 1951, meaning the radio signals have been traveling through space for 65 year. Since those signals travel at the speed of light, an alien civilization 65 light-years away could theoretically be tuning in right now to see Lucy and Ethel try to get their husbands take them to the Copacabana. But exactly how theoretical is that “theoretically”? And could humans someday tune into television shows from distant stars?

“So we are just right now at that stage where we could detect television,” SETI astronomer Dan Werthimer told Inverse at last weekend’s Star Trek: Mission New York event. “Television is actually one of the harder things for us to pick up if they have just like our television. Because the problem with television is that it goes off in all directions, it’s an omnidirectional transmitter… It gets pretty weak pretty fast. And so right now we just with this new program have the ability to pick up if they have something like television. We can pick it up on the nearby stars, just barely.”

If we had a particular nearby star we wanted to focus our attention on, Werthimer said we might be able to extend the range of what we could pick up to 50 light-years. That means the alien equivalent of that I Love Lucy episode would be about 15 light-years beyond our current range, though we might be able to pick up the last couple seasons of its mid-‘60s follow-up, The Lucy Show.

The odds then of us picking up alien television is vanishingly low. Werthimer said it’s unlikely the nearest intelligent civilization is within 100 light-years, putting the likely range at closer to 1,000 or even 10,000 light-years. Our listening technology still has a long way to go before it could pick up such weak signals from such tremendous distances, and that’s all assuming aliens would be at the same infant stage of our technological development that we are. After all, it’s hard to imagine any civilization wouldn’t get tired of television after a few thousand years, no matter how great the 500th Deadwood revival — this time set on lawless Ganymede! — might be.

But that doesn’t mean there aren’t other ways humanity is making itself known to the larger universe — and, in theory, aliens could someday make themselves known to us. “The Russians and the U.S. have these early warning radar systems for ballistic missiles that are looking for incoming missiles,” said Werthimer. “And they’re sweeping the sky looking for stuff in the sky. And because it’s not omnidirectional, it’s a sweeping kind of beam, that means they can put more power into a small area. And if E.T. had something like that, you could see it as it sort of sweeps by you’d see kind of a pulse like a lighthouse flash and as it came by again there’d be another flash.” Such signals could be detected out to a few hundred light-years — still probably not quite enough to feel great about our odds of finding life, but at least in the ballpark.

But that’s nothing compared to the most powerful signals we’re capable of sending into the universe. The Arecibo telescope, which we use to listen for signs of extraterrestrial life, also has a transmitter. Though it’s the same wattage as a television signal, it’s tightly focused, which makes it much more powerful.

That would be just about the longest, most unbearably stilted conversation imaginable. On second thought, we’d better get to work on picking up alien television: We’re going to need something to pass the time.

More like this
Science
8.9.2022 3:00 PM
Aliens could move entire planets to send a math-based code to other civilizations
By Kiona Smith
Science
8.5.2022 12:15 PM
10 years ago, the Curiosity rover arrived on Mars — and revolutionized the hunt for alien life
By Allie Hutchison
Science
8.2.2022 9:15 PM
Alien friendly? A nearby planet poses a vexing habitability puzzle
By Kiona Smith
Related Tags
Share: