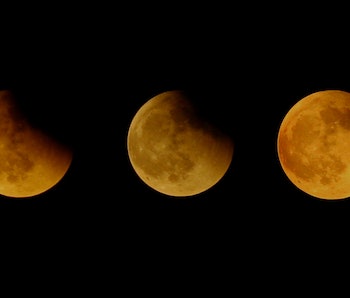 Seekers of astronomical enlightenment will look up to the sky tonight as a full moon partial lunar eclipse manifests in the constellation Aquarius. To stargazing lovers of woo, the rare event marks a major astronomical shift — we’re finally exiting the Lion’s Gate Portal, guys! — one that predicts big changes in the weeks ahead. Is a “huge energy shift” in the stars? Should we prepare to “apply ourselves collectively”? What in heavens might the future have in store?

Science has a prediction for you: The partial lunar eclipse doesn’t mean a thing.

While tonight’s partial eclipse has internet astrologers in a fortune-telling frenzy, it’s got weary astronomers sighing with a ¯_(ツ)_/¯. Sure, the event is, objectively, somewhat interesting because the sun, Earth, and moon will align in a way that also lines up with the constellation of stars known as Aquarius, placing the eclipse at the old water-bearer’s right hip, which doesn’t happen too often. But unusual circumstances aside, the event is still kind of meh. Because only a sliver of the moon will be slipping behind the Earth’s shadow, tonight’s eclipse only counts as a partial one that’s probably too faint for anyone gazing from their backyard to notice.

Not that this matters to those seeking spiritual guidance from the stars. As the “experts” say, according to one local Niagara news site, it doesn’t matter how faint the eclipse is, because “we don’t have to view it to feel its effects.” Perhaps we are too unenlightened to follow the complex train of logic presented by Sun-Gazing.com:

This lunar eclipse is more noteworthy than usual because it will be taking place in the constellation of Aquarius, and when we are in Leo (July 23–Aug 22) as we are now, it’s opposite the sun. As such, the darkened moon will have a profound impact on all of our lives and we can expect a major shift to come our way!

But just because something is rare or unusual doesn’t make it meaningful. Are diamonds anything more than rocks in the ground? Did anyone’s life really change after catching a rare Meowth in Pokémon Go? Random events are only as important as the meaning we ascribe to them. The universe, reveling in endless entropy, couldn’t care less.

Tonight’s partial lunar eclipse will have about as much of an effect on your life as Mercury did when it was “in retrograde” earlier this year. Which, depending on how much of a sucker you are — we’re looking at you, Taylor Swift — could mean one of two things: You should either brace yourself for an inundation of “new beginnings and possibly unexpected endings,” or you can wearily accept that your pre- and post-partial-eclipse life will feel exactly the same — that is, haphazard, arbitrary, and directionless, because no force of nature or spirit has or ever has had any hand in shaping your so-called destiny.

More like this
Science
18 hours ago
Do aliens exist? Jupiter’s moon Europa could hold the answer
By LAURENCE TOGNETTI and Universe Today
Science
8.13.2022 5:00 PM
Astronomers discovered the earliest known dark matter — and it's not behaving as predicted
By Jeff Nagle
Science
8.13.2022 10:00 AM
How the Webb Telescope could unveil the newborn universe
By CAROLYN COLLINS PETERSEN and Universe Today
Related Tags
Share: