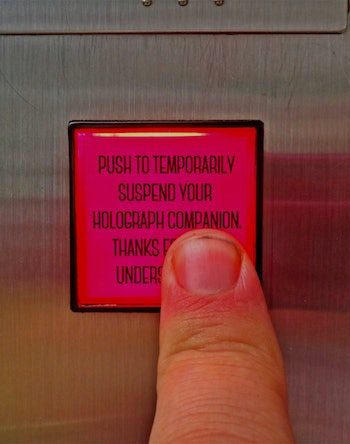 A German research lab specializing in futures research has taken the most everyday view of the future possible: Public signage

The images by Hypermogen offer a unique, albeit slightly dystopian take on the future by focusing on how various forms of signage will change to reflect the new technology. Warning stickers, road signs, and even advertisements act as an illustration of how we might just interact with technology of five, ten or thirty years from now.

Some of the images, like this Precognition Classroom waiting area or the space elevator loading zone are definitely tongue-in-cheek odes to science-fiction, but there are a good number of images that envisage a future coming much sooner than our inner Ron Swansons would like to admit.

Out of all of Hypermorgen’s treatment of future tech, autonomous taxi cabs are the most likely to happen. If recent research by heavyweights like Google and Tesla are any indication, the future of automotive transportation will require fewer and fewer human drivers, and will be here sooner than most of us think.

Restaurants accepting cryptocurrency aren’t necessarily common yet, but they certainly aren’t new. As it continues to become more legitimate, there is a chance your favorite coffee shop or eatery might not only start accepting your preferred digital currency, but adjust their menus in real time based on the market. Just like gas stations regularly adjust prices based on the value of oil, technology that can automatically update a menu based on currency conversion rates is not too far-fetched.

Like a real-time Groupon being burned directly into your retinas, augmented reality marketing looks to be the next step in mobile based advertising. Instead of — or more likely, in addition to — companies filling inboxes with ads or websites making mobile content inaccessible until users have watched annoying 30-second commercial, AR advertisements will simply broadcast instantaneous coupon notifications directly to mobile device based on the potential customer’s geographic location.

In fairness, giving users real-time offers for BOGO medium pizzas from their neighborhood pizza place or a half-off deal for a mani-pedi from the spa they pass everyday hoofing it home from work has a lot of appeal. Also, bonus points for the implication that the incredibly high risk of being hacked will do absolutely nothing to dissuade potential deal hunters from the lure of the high-tech adware.

It’s no secret that law enforcement agencies across the US are already utilizing drones for the purposes of surveillance (and potentially, for suppression). However, one of the big legal questions that will be litigated in courts for decades to come is the level of disclosure governments need to give citizens alerting them to surveillance drones recording in public spaces.

After the debut of smart glasses, the invent of smart contacts was just a matter of time. As it turns out, South Korean tech giant Samsung recently filed a patent for smart contacts complete with a built in camera. Much like drones, the real question this image poses isn’t the adaptation of the technology, but the ethical concerns of how governments chose to balance state security with individual privacy.

If we accept the premise that at some point bathroom selfies become illegal (which bathroom selfies a potential violation of privacy bathroom selfies are illegal; from a taste standpoint In the United States, there has been some recent pushback to the idea of the government being able to access a citizen’s mobile device, but

There is a good chance bio-printed meat will eventually be how a good portion of the world’s population will get their protein. As unappetizing as it may sound today, synthetic meat will theoretically be cheaper, more ethical, and less of an environmental hazard than raising actual animals. While replicated hamburgers were once reserved for the crew of the USS Enterprise, the ability to produce lab grown meat may come to a butchers shop or restaurant near you in the next few years.

The bad news is that you’re still a ways away from jetpack commuting. The good news is that everyone else is also a ways away from jetpack commuting. Simultaneously the coolest yet most terrifying idea out of the bunch, renting a jetpack like a bike or a baby stroller seems like a great idea in theory, but somehow the “fly at your own risk” disclaimer just doesn’t quite seem adequate enough.

See even more images, including the one of this “portable laser pen for wound healing,” here: signsfromthenearfuture.tumblr.com.