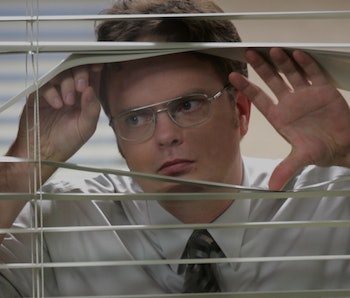 A recent Knox University study explored a subject that has surprisingly gotten little attention from psychologists and sociologists over the years: creepiness. The mild anxiety response to the perception of creepiness is much less visceral and intense than fear or disgust, but it’s just as important of an evolutionary defense mechanism.

Whereas fear tends to be a response to clear and immediate danger, the ability to perceive creepiness is a very particular response to ambiguity; the sense that something or someone could potentially be dangerous. In essence, the perception of creepiness is your brain’s first line of defense. That tingle in your gut you get when you don’t think Glenn from accounts receivable is an ax-murderer, but you aren’t 100% sure he isn’t, is specifically designed to prevent you from entering situations where you might find out Glenn’s ax-murderer status for sure one way or another.

The good news is that most people can consciously accept that being creepy isn’t the same as being dangerous, so there’s a high chance your co-workers aren’t scared of you … yet. If you or someone you know is getting the cold shoulder from co-workers, follow these 5 simple tips to get out of the creep zone.

If your office doesn’t have a creeper, it’s probably because you are the creeper

In the case of creepiness, game tends not to recognize game: people who tend to lack the social inhibitions that make them creepy to others, tend not to have the awareness to identify creepiness in themselves or others. Hate to break it to you, but if you don’t think you have any creepy co-workers, there’s a good chance the office creeper is in the mirror staring back at you.

The good news is that acceptance is the first step to recovery. The sooner you open yourself up to the possibility that your co-workers not wanting to kick it with you is a natural response to you being a creepy fucker, the sooner you can start to de-creepify and start making some friends.

Visual cues are hugely important to how we perceive creepiness in others. Greasy hair was found to be more creepy than messy hair or toupees. There were multiple answers that involved body type: overly muscular people were found to be creepier than overweight-to-obese people, but not as creepy as extremely thin people. Pale skin was found to be a bit more sinister that unnatural tans, while long skinny digits were found to be more anxiety inducing than sausage fingers. The great news is if you look like Donald Trump, you might be OK. However, if you’re rocking that Steve Buscemi aesthetic, you might be in for some mighty lonely lunch breaks.

According to the study, one of the biggest indicators of creepiness is lack of physical boundaries. A lot of this anxiety tends to revolve around the perception of sexual threat: men are more often perceived to be creepy than women, women tend to more often perceive sexual threat from a creepy person, while older people tend to be less alarmed by creepiness than younger people.

Now, I can already hear some of you going full on Hurt Reynolds, but before you type up that “OH, SO BEING A MAN MAKES ME CREEPY BY DEFAULT??” response, take a deep breath. Nobody is saying that being a man inherently makes you creepy, however, being a man who can’t stay out of people’s grills, and has trouble keeping your hands to yourself makes you creepy as fuck 100% of the time.

Regardless of gender, no one likes close talking, handshakes that last too long, intense eye-contact, or unsolicited shoulder massages. If you find yourself doing any of that, stop it. That shit was, is, and forever will be mad creepy.

Don’t worry, be happy … just not that happy

As it turns out, a little laughter can go a long way, but too much laughter can guarantee no one will sit with you in the break room. According to the study, unpredictability tends to be a huge red flag for most people, especially when expressed through inappropriate laughter. Harsh or abrasive laughing, laughing “too hard” at things that aren’t that funny, or being the only person laughing in a room full of people are all huge red flags.

On a side note, the study found there isn’t nearly as much of a negative correlation between creepiness and occupation as you might think. Only four occupations were seen as overtly creepy funeral directors, sex shop owners, taxidermists, and the creepiest of them all, clowns.

Seriously, nobody wants to hear about your butterfly collection

Sharing your off-the-clock activities can be a great way to bond with co-workers, but it can also be a signal that people probably shouldn’t kick it with you after clocking out. Typically collecting things is perceived as being kind of creepy. Even something as innocuous as stamps or figurines can come across as slightly creepy, depending on age.

Bonus creeper points for any collection that involves living things like insects, cats, or fungi (I promise your co-workers aren’t nearly as interested in hearing about your home based kombucha brewing as you think). Go ahead and award yourself a 2x multiplier for collections of things that used to be alive like insects, snakeskin, or taxerdermized pets.

If really you want to avoid unlocking the “I’m A Creepy Bastard and No One Will Play with Me” achievement, make sure not to pair any collecting hobby with an activity that ends in “-watching” especially if it involves public places and/or cameras.