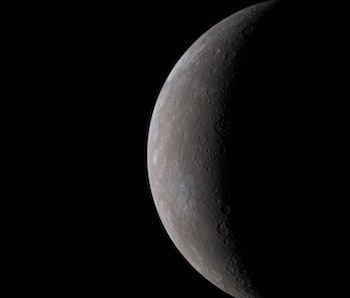 This evening, about 45 minutes after the sun dips below the horizon, Mercury will be perfectly positioned for observation in the Northern Hemisphere. The dark and dusty planet closest to the sun will be at its greatest eastern elongation of 19.9 degrees from the sun — the highest point it will reach above the horizon in the evening sky.

The greatest elongation is the biggest angle that ever occurs between a planet inferior to Earth’s orbit and the sun, making it the best opportunity to view Mercury and Venus. For Mercury, this happens two times around April and May, at sunset, and in October and November, at sunrise.

To help you find Mercury tonight, Earth Sky says you can use the Orion’s Belt constellation as a pointer. At this time of year, Orion hovers just over the horizon, and it always points toward Sirius, the sky’s brightest star. As the constellation appears after sunset — 7:39 p.m. New York City time — find the three stars that make up the Belt and, in the opposite direction of Sirius, they will be pointing in the general direction of Mercury.

After the sun sets, the planet will remain in the sky for about one hour and 45 minutes. Skygazers should be able to see Mercury without any assistance, but binoculars can help.

Spotting Mercury in the sky from Earth is a rare sight. Since it is so close to the sun, it is often outshined by the sun’s gleaming rays. Being so close to the sun, one would expect the planet to reflect more light. Researchers at Johns Hopkins University found out in March that the planet is blanketed by carbon dust, causing it to only reflect about two-thirds as much light as the Moon.

The next planet to come into Earth’s view will be Mars on April 24, starting at 10:30 p.m. local daylight time and remaining visible in the sky for the rest of the night. Space.com reports that the planet will more than double in brightness by the end of April, almost matching Sirius, as it makes its orbit close to Earth.

If you miss it today, you can still see Mercury until April 28, after which time the planet will be too dim and the sky too bright to make out. On May 9, we will be able to see Mercury again, but it will look like a small black disk slowly moving in front of the sun. This event is called an inferior conjunction or transit, and for Mercury, there are, on average, only 13 transits each century.